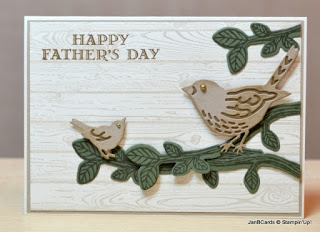 I had some fun playing with the Best Bird’s Stamp Set and the coordinating Birds & Blooms Thinlits Dies. There is such an amazing selection of dies and stamps in this combo, I didn’t really know where to start! 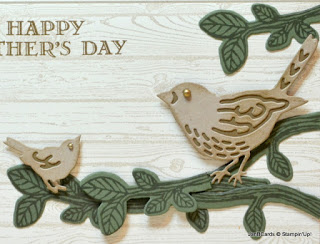 I settled on the three detailed bird dies purely because I wanted to see what they looked like as die-cuts. I used Crumb Cake Cardstock and die cut both the large birds and the baby bird. I did wonder if the die cuts would match up with the stamps, but they don’t. There are two straight-cut dies of the two large birds that do match up with the stamped images but I haven’t played with them yet!

Although I prepared all three birds in the same way, I only used one large bird and the baby bird for my card. The third bird is now waiting to be used on another project. 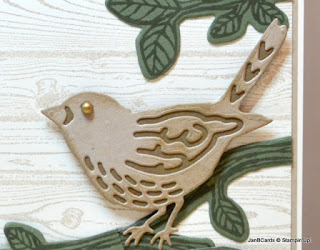 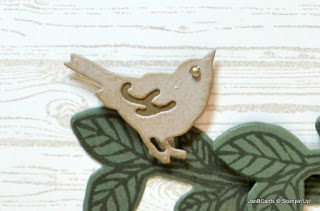 I digress! Back to the actual bird die-cuts! They had a lot of see-though areas that I decided would probably look better if there was a darker layer behind them. Using Soft Suede Cardstock, I drew around each bird with a pencil and then cut them out, making sure that I was cutting just inside the pencil line. Then I placed this behind the bird and trimmed off any excess that was visible. I put some wet glue on the back of the Crumb Cake bird and adhered the backing in place. I sponged the edges of all the birds using Crumb Cake Ink and a Dauber.

Using Always Artichoke Cardstock and Ink, I stamped the branch once and die cut it. Then I was ready to prepare my card. 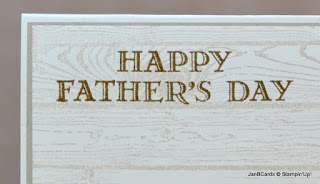 I started with a Very Vanilla Cardstock card base with a layer of Crumb Cake and a top layer of Very Vanilla. I inked the Hardwood Stamp using Sahara Sand Ink and stamped the top layer. I adhered all layers together using Tombow. As I’m doing a Village Fair on Saturday, I decided to make this a Father’s Day card and chose the sentiment from the Guy Greetings Stamp Set. I stamped it in Soft Suede Ink.

I decided where I wanted the branch and adhered it onto the card front using Tombow. Then I used Dimensionals to adhere the birds in place but glued their feet to the branch – this was just as a little bit of protection so they didn’t get broken off! 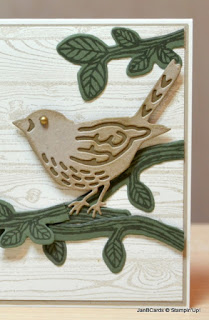 It looked a nice clean card but unfinished! I couldn’t decide what I wanted to add and decided to make it look like the birds were on a tree rather than just a branch! I stamped and die cut two more branches. Life would have been easier had I decided to do this before I’d adhered the first branch down! LOL! But I persevered and succeeded in the end, although there are a couple of places that could do with an extra leaf or two! I may or may not do this! Although the die-cut does produce an eye, I added pearls I’d painted with a Sharpie pen.