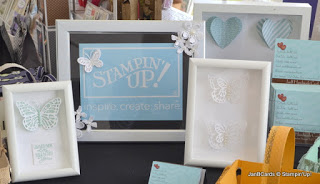 This morning I posted my video showing you the goodies I’ve bought from the new 2016 – 2017 Annual Catalogue.
The first part lasted half an hour so I decided to show all the other items I had bought, won or was given! 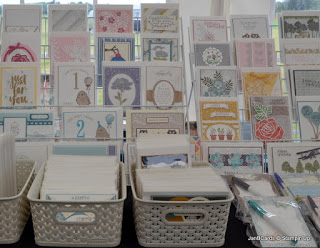 The finished length is 46 minutes, so I suggest you get yourself a cup of tea/coffee and a cake or biscuit and relax.

You may want to have paper and pencil handy so you can make a notes for your wish list.
Yesterday our day started really well with a pleasant drive over to Biggin Hill in the sunshine. 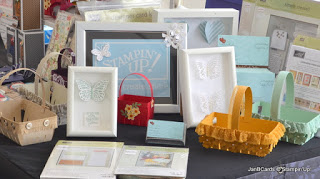 Yesterday was the Queen’s official 90th birthday and it was lovely to see so many Union Jacks flying and stalls decorated with Union Jack bunting. During the day, the Red Arrows did a fly past Buckingham Palace and then flew down to Biggin Hill and put on a brilliant acrobatic show – as always, it was amazing! 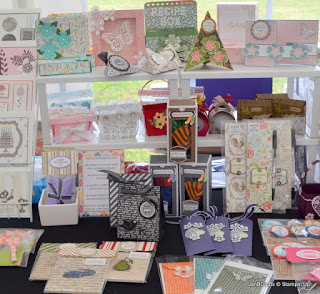 I digress! We set to and had everything up and ready in plenty of time, including moving the car to the car park. 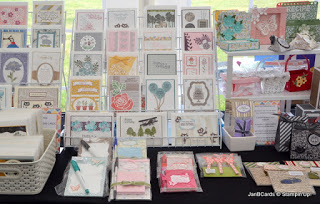 There was a lovely atmosphere in our Craft Village as the steady stream of visitors passed through.

They looked at the various stalls, chatted and laughed with stallholders, everybody having a generally good time!

I had lots of lovely comments about my handicrafts and many people were interested to hear about my classes and videos, etc.

Unfortunately, not many people were spending, not just with me but all the stallholders!
We persevered and slowly, slowly our sales crept up but it meant the day was a hard slog!

We met lots of really nice people who took a sincere interest in what I do.

I did find two ladies who are very interested in coming to my classes. Talk about coincidence!

One of them lives a three minute walk away from my daughter (who lives a ten minute drive from me)!

I hope they phone to book a class, they were very friendly and it’d be nice to see them both again. 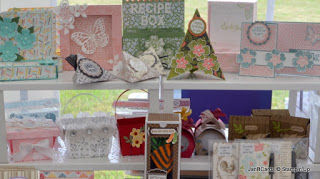 By the time we arrived home, we felt shattered and I didn’t have the time nor energy to make a card to share with you today!

I’ve decided to share some photographs from today instead – hopefully, you’ll recognise some of the cards you can see on the card stand! 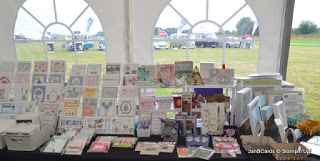 As we were packing up. a gentleman came over and asked how much for my Stampin’ Up! decorated photograph frame! (see the top photograph). I explained it was part of my advertising and wasn’t actually for sale! I said that I could make one for him and he could collect when I’m at the Warlingham Village Fair next week.

Fortunately my brain was working faster than my tongue and I agreed to sell him the one on the stand but take the poster out. Unfortunately my brain didn’t work as fast as I would have liked when it decided how much I wanted for it! LOL! 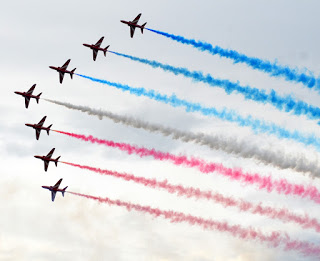 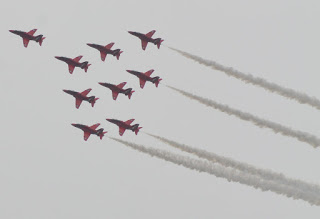 I’ll make three more in time for next week’s fair which means yesterday’s customer bought his for half price!

Hubby took breaks from the stall during quiet periods so he was able to watch the fabulous Red Arrows Acrobatic Team and to give his a camera a good workout!
Our plan for today, is to visit our friend in Alyesbury, back down to good old Ikea, then home to catch up with everything I’ve fallen behind with!

By the way, many thanks to Jenny Cain, who’s a demonstrator in Australia. Jenny emailed me about the two oriental symbols on the stamp set Atistically Asian. The stamps have been placed in the catalogue next to sentiments. One starts with the word Friendship and that’s what that symbol means and the other one begins with Faith and that’s what that one means. Many thanks for your help, Jenny – really appreciate it!

I wish you a very happy Sunday and until tomorrow, happy crafting.