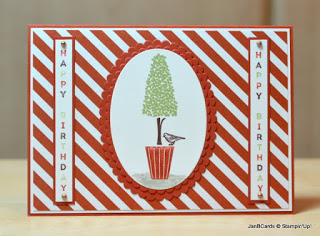 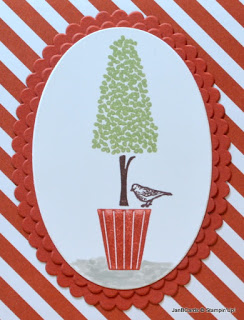 The Crown Prosecution Service (CPS) have decided not to prosecute one of the guys the police had arrested and charged with the burglary from our garage on 5th December 2015. I don’t know what happened to the other two!

I’m not surprised at the decision because, although the CCTV film proved he was in the vicinity which was private property, there wasn’t any concrete evidence that proved he broke into our garage nor that he had any of our property!

I don’t feel upset about the decision as God will be the Judge.

Yesterday evening, I was prepping for the video I’m making this morning. Following on from yesterday’s blog, several of you said you’d like to see a video showing the goodies I received from the new catalogue.

Although it’s a busy weekend, I’m confident I can get it edited and uploaded for Sunday morning as usual!

Not surprisingly, I chose to use another new stamp set for today’s card. This one is called Vertical Greetings and is on page 109 in the new catalogue. 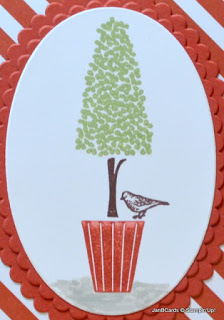 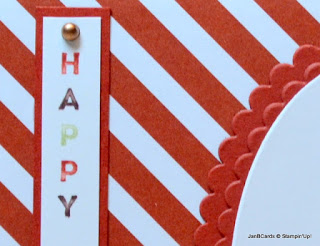 I have wanted a stamp set with vertical greetings for a very long time, so this was on my number one wish list – yes, I have more than one wish list!

To make my card, I started with a card base in Cajun Craze Cardstock with a layer of Whisper White and then a top layer of the stripe design in Cajun Craze from the Regals Collection Designer Series Paper (DSP) Stack.

I chose the single tree stamp and used my Pear Pizzazz Marker Pen to paint the top of the tree, then Chocolate Chip to paint the trunk and Cajun Craze for the plant tub.

I huffed on it before I stamped onto a piece of Whisper White.

The leaves on the stamp are actually outlines, so I used my Pear Pizzazz Marker Pen and very carefully coloured them all in.

Using Chocolate Chip Ink, I stamped the bird from the Sitting Here Stamp Set so he was sitting on the tub.

As I said on my blog a couple of days ago, I can see some of the images from the Sitting Here Stamp Set popping up on random cards like this!

I used the Layering Oval Dies to cut out the image and then I used two larger Scalloped Ovals to die cut two Cajun Craze ovals. I thought it would add a nice detail by having a double-scalloped layer.

I tried a combination with a larger Pear Pizzazz Scallop, a smaller one, two Pear Pizzazz scallops but decided that two Cajun Craze scallops look best!

Then I went back to my three marker pens and coloured alternate letters on the Happy Birthday sentiment. I painted two sentiments and then layered both on them on slightly larger strips of Cajun Craze.

I used my Bronze Sharpie Pen and painted four Pearls and put them top and bottom of each sentiment so they look like screws holding them up!