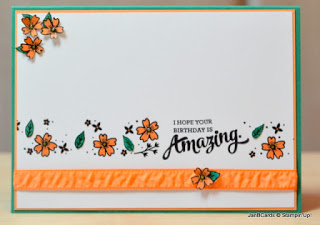 My first proper order from the new catalogue arrived yesterday and it was jam-packed with goodies. I wasn’t planning on making a video to show you what I bought but I’m having second thoughts now. On page 175 of the new catalogue is a new product called Fabulous Foil Designer Acetate and I think you need to see it to fully appreciate it. Please let me know if you’d like to see my new products videoed. ☺ 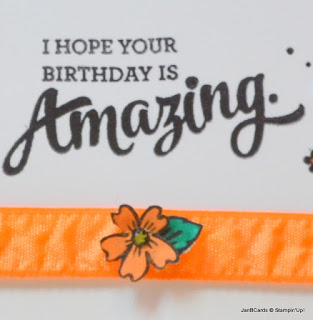 Yesterday I used the new stamp set called Mixed Borders which is on page 123. I don’t know how I found out but when I first saw this stamp set, I didn’t realise the borders were continuous  with a space in the middle which is the space for one of the sentiments! It’s a brilliant idea!

Although I have all the Stampin’ Up! Clear Blocks that are available, I found this stamp has to be placed on the largest oblong block – F – at an angle. I know stamps can be used on our stamp cases, which is alright if your hands are big enough to hold it steady without it pinging open! I don’t know how well you’d see through the photopolymer, even if you use an empty stamp box – not something I’d like to try. 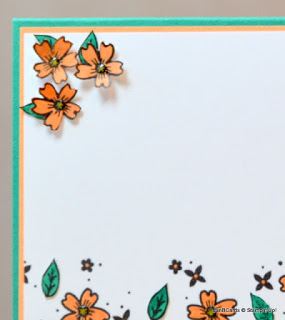 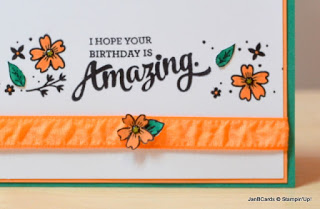 To make my card, I started with a card base of Emerald Envy Cardstock, then a layer of Peekaboo Peach and a top layer of Whisper White. Using the Basic Black Archival Ink, I stamped the flowery border about an inch up from the bottom. Using my Peekaboo Marker Pen, I coloured the large flowers and the centres of the small black flowers. Then I used my Daffodil Delight Marker Pen to colour the centre of the large flowers. Again, using the Basic Black Archival Ink, I stamped the sentiment I HOPE YOUR BIRTHDAY IS AMAZING in the gap between the flowers towards the right hand side. As it’s a photopolymer stamp, I didn’t feel the need to use my Stamp-a-ma-jig! I took some scrap Whisper White Cardstock and stamped the flowery border again, and I also stamped the leafy border.

I coloured the large flowers as before and I used the Emerald Envy Marker Pen to colour the leaves. Then I fussy cut the flowers, the four pairs of identical leaves and separated them into singles, and also one large single leaf.

I adhered the top layer to the Peekaboo Peach layer using Tombow. Then I wrapped a piece of the new Ruched Ribbon around the front and adhered it at the back with Fast Fuse. Then I adhered the card front to the card base. I curled the petals of the three flowers upwards and adhered them in the corner using Tombow. I adhered the full leaves I’d separated from the pairs along the flowery border. I used Tombow to adhere the “half” leaves behind the three flowers in such a way that it can’t be seen that they’re incomplete!

I used a glue dot to adhere the ribbon to the card front and then I used another glue dot for the fourth flower and the single leaf. I adhered these where the glue dot was under the ribbon just below the sentiment.

That’s about it today. I’m off to work now but will be back in my craft room late this afternoon to play with another new stamp set! ☺ Until tomorrow, happy crafting.