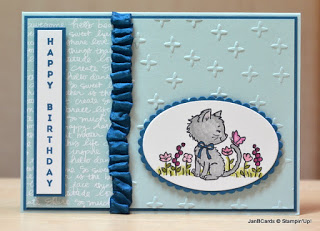 Yesterday I played with the new Pretty Kitty Stamp Set for the first time. Other new products I used for this card include the Vertical Greetings Stamp Set, the Dapper Denim Ruched Ribbon, and the Sparkle Embossing Folder. 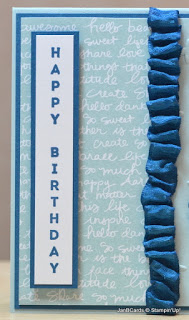 To make this card I started with a card base of Soft Sky Cardstock, then a layer of Dapper Denim, and a top layer of Soft Sky. I cut a 1.75″ wide strip of the Soft Sky script design from the Subtles Designer Series Paper (DSP) Stack.

I placed the top layer of Soft Sky into the embossing folder leaving 1.75″ outside the folder. I found this just about fitted into my Big Shot if I put the fold in first, placing it so the edge of the cardstock would go though without getting caught.

Using Tombow, I adhered the two layers to the card base and then the DSP to the left hand side. 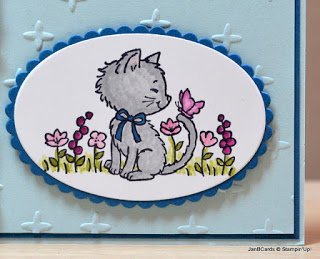 I applied some Fast Fuse along the seam where the DSP joins the embossed cardstock.

Using Basic Black Archival Ink, I stamped the image onto a piece of Whisper White Cardstock. 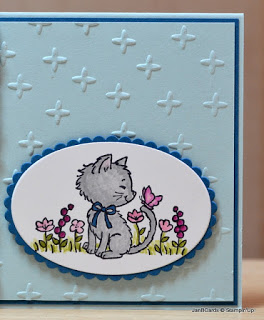 Once I’d finished colouring the image, I die cut it using a straight-cut Layering Oval Die. I used the next size up Scalloped Layering Oval Die for the Dapper Denim layer. Using Tombow, I adhered the two together and then adhered them to the card front using Dimensionals. 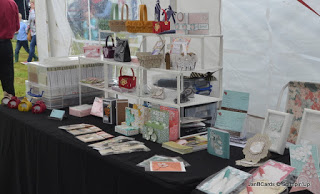 I chose the sentiment from the Vertical Greetings Stampset and stamped it in Dapper Denim Ink onto a piece of Whisper White Card Stock. Using Dimensionals, I adhered it the card front as far to the  left as I could.

The last two photographs show my stand at the Warlingham Village Fair on Saturday. I had two six foot tables which allowed me to spread my products out quite a bit in comparison to the previous weekend at the Biggin Hill Airshow. I think this made my stand look more appealing to a visitor’s eye rather than a table that’s chock-a-block with products.

That’s about it for today. I hope you have a great week and until tomorrow, happy crafting.