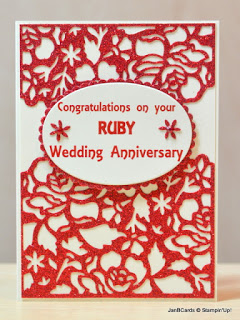 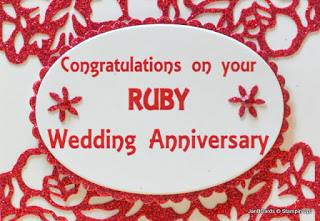 Yesterday I said I was going to play with our Glimmer Paper using the new Big Shot Platform and let you know how I get on!

As you can see from today’s card, I’ve been true to my word! I’m really pleased to be able to say that it is now possible to place our intricate dies on top of the Glimmer Paper and get those nice downward curved cuts.

We had been told by Stampin’ Up! to place the Glimmer paper reverse side facing up and then place the dies on them.

The reason being that there is a plastic-like sheet on the back that the dies really struggle to cut through.

I tried the suggested method once and really did not like the flat looking edges to all the cuts and gave up using intricate dies on Glimmer Paper.

Although the new Big Shot Platform does make cutting the intricate dies much, much easier, I still found I needed to crank it through the Big Shot four times, then turn it around and crank it through a couple more times. 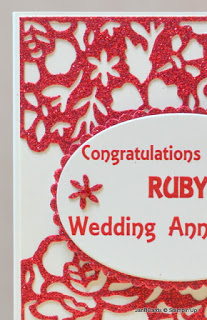 I also found the die lifted clean off the Glimmer Paper and I needed my brush to roll over the back to remove the cut outs.

It still left a few of the smallest bits to be pushed out with the Paper Piercer.

As the previous day, I didn’t use any waxed paper or dryer sheets.

My personal verdict is that I’m happy to go back to using Glimmer Paper and intricate dies together as long as I have the new Platform.

It’s still a bit of an effort to use the Glimmer Paper and intricate dies together, but it’s nowhere near as difficult as it was previously and for the finished result that’s achieved, it’s definitely very well worth it.

As today’s card is very similar to yesterday’s card, I’m just explaining the changes I’ve made. 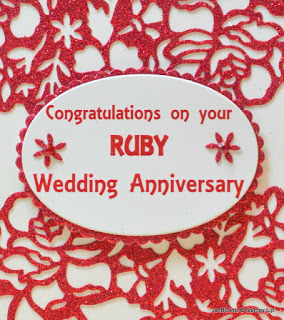 I used Very Vanilla Cardstock for the card base and the layer and Red Glimmer Paper with the Detailed Floral Thinlits Die.

I generated the sentiment on my PC and printed it onto a sheet of Very Vanilla.

I used one of the straight cut Layering Oval Dies to cut it out and then a scallop cut die from the same set for the Glimmer Paper layer under the sentiment.

The little flowers on the sentiment were  retrieved from the cut out waste – there are two in the larger die and one in the smaller one.

I used a red Sharpie Pen to colour two Rhinestones and adhered them in the centre of the flowers. 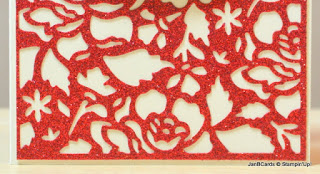 If you’ve been thinking about getting the new Big Shot Platform, I hope you’ve found this helpful. Until tomorrow, happy crafting.