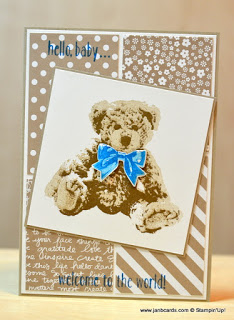 I hope you’ve had a great weekend. Today is the start of hubby’s two week’s holiday. We’re not planning on going away but he needs to use it or lose it!

He has a long list of jobs he wants to get done during these two weeks………….. fortunately, sorting out the garden is one of them!

Summer still hasn’t arrived and we’ve had rain most days since goodness knows when. This has meant hubby has not had many opportunities to get out into the garden – he’s a fair weather gardener! – plus all the plants, grass and hedges have been growing like wildfire with so much rain! 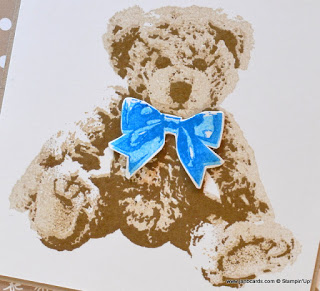 Yesterday I decided to have a play with the Baby Bear Stamp Set. This is the set I won for a Prize Patrol in Telford on 16th April. I had sort of tried using this stamp before but yesterday was my first serious attempt! 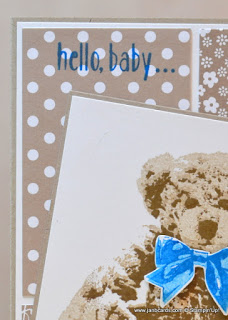 Using some scrap paper I stamped the first image with Chocolate Espresso and knew immediately that this wasn’t going to work – it was far too dark! However, I persevered – just in case I was wrong! – and stamped the second image with Soft Suede and then the third Crumb Cake. It just did not look good.

To make my card I started with a base of Crumb Cake with a layer of Whisper White, which I adhered together with Tombow.

I cut two strips of the Neutrals Designer Series Paper (DSP) Stack, one each of the two designs. I cut them at three inches tall and adhered one of all four designs on the top Whisper White layer. 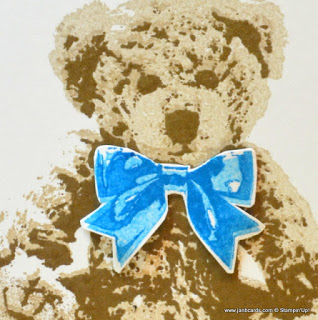 I staggered my DSP but you could use the same sizes side by side or you could cut the strips in half so all four are the same.

I stamped the bear as described above and cut out in a square, then layered it onto a piece of Crumb Cake.

I chose Pacific Point Ink for the bow which is also two-step stamping. I stamped off for the for the first layer – the more solid design. Then I stamped off again for the second image and then fussy cut it.

I chose the two sentiments from the Baby Bear Stamp Set and stamped then in Pacific Point Ink directly on the card from. I decided against any final touch as I didn’t think it needed anything else.

I’ll be making a video showing how I made this card and post it next Sunday. That’s about it for today, so until tomorrow, happy crafting. ☺