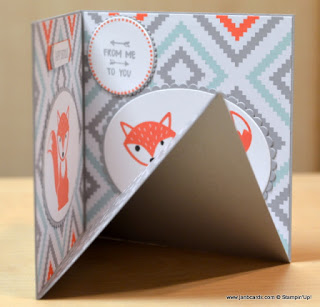 This
morning, I posted my video showing how to get perfect edges on the
Corner Pop Up Card. As you know, this video has been a real challenge for me this
week but I succeeded in the end and I’m very pleased with the result.

As
you’ll see on the video, I made several attempts – using non- Stampin’
Up! cardstock – to make this card without my extra cut line but all
attempts failed.

I was given a swap at Telford in April from Dee Copus-Read www.facebook.com/LadyDeeCrafts. Not only had Dee made a Corner Pop Up Card, she also made a wired, beaded charm which she fixed to the front. 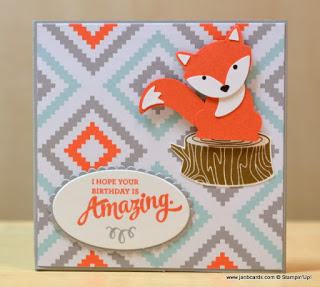 In my video, I show you how to get perfect results
everytime. It’s a fabulous fancy-fold card and I’m sure recipients will
love it. As
this card has at least three sides that need to be decorated, I used
four stamp sets for the images and the sentiments. 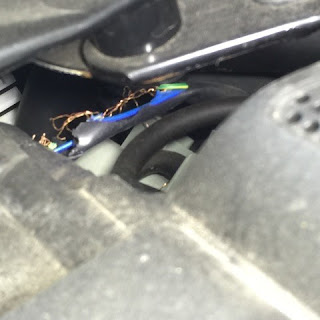 These are Foxy
Friend, Ready To Pop, Mixed Borders, and Barnyard Babies. Other products
I used are the Layering Oval Framelits, Layering Circles Framelits, the
Classic Label Punch and the Fox Builder Punch.

I’ve also included three photographs of the rodent damage that has been done to my car. The first photograph shows the cable that obviously provided the best part of the meal! Fortunately this was quite straightforward, and not too expensive, to fix! 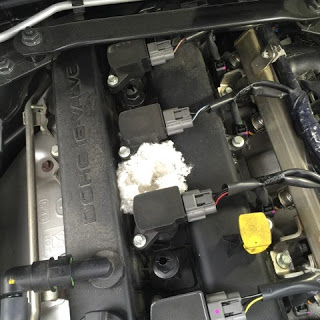 The second photograph shows a nice tidy pile of ??something that has been chewed from inside the lid of part of the engine block. The third photograph shows the inside of the lid and the well-chewed white “part”!

Sorry about the terminology I’m using but I really don’t know what goes on under the bonnet of a car!!

When we arrived home, hubby opened up the bonnet to explain what was what. 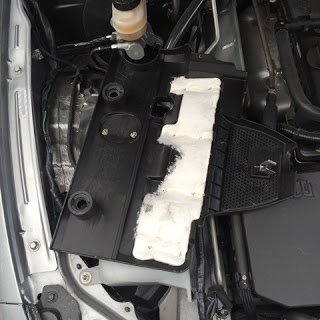 Whilst we were checking it out, we noticed some chewed grey sponge sitting tucked away in a back corner. It was this grey sponge that first alerted hubby that something was amiss because he found a pile of it on the floor under the car!

Neither of us are happy about putting traps done to kill the rodents, so we’re going to try the more rodent-friendly methods first, starting with Lenor Dryer Sheets.

I’ve put a fair few around the garage, on the floor, near the doors. We’ve also put three under the bonnet and rather than run the risk of forgetting to remove them before driving off, we’ve left the bonnet open! I’ll keep you posted if we have any more visitors.

Finally, I had my first check up with my orthopaedic consultant since I had the Steroid Block Epidural in my spine at the end of May. Unfortunately, as the effects only lasted a couple of weeks, he’s referring my onto another consultant who deals with pain management! Watch this space!