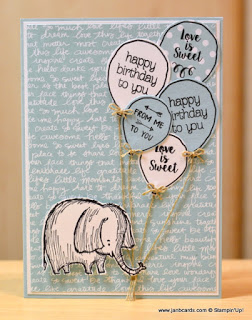 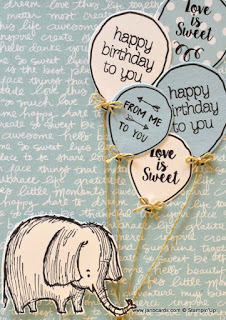 We were at home over the weekend because hubby was working.

Yesterday
I was working on the fancy fold card I want to make for Wednesday’s
video.  If you saw my video where I shared the swaps I received at
Convention in April, you may remember me showing you a card that opened
with a trianguler fold that came down and formed a “floor”.

I don’t know
what this card is called but I’ll probably call it something like corner
pop-up box/card.I saw someone make one on YouTube but mine never works
out quite right!

I’ve tried five or six now and I need to do some extra
cutting to get the kind of result I expect. Eventually, I gave up
trying yesterday, feeling very frustrated.  However, I’ll carry on today.

If I do successfully make a video, I’ll show the ones that haven’t gone
very well. 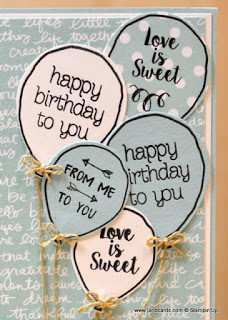 Because
my mind was turning the fancy fold over and over, I found it difficult
to switch off and think about a card for today.

I decided to go for some
fun and chose the elephant from Love You Lots. I’d been thinking about
using balloons for my fancy fold card and still had Balloon Celebration
Stamp Set on my desk. So decision was made. 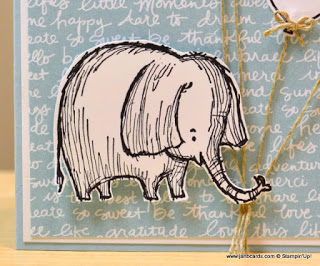 I
started today’s card with a base of Pool Party Cardstock, followed by a
layer of Whisper White and topped with a layer of the Pool Party script design from the Subtles Designer Series Paper (DSP) Stack. I
adhered them together using Tombow.

I
stamped the Elephant onto a piece of Whisper White using our Archival
Basic Black and then fussy cut it out leaving a white edge all around. 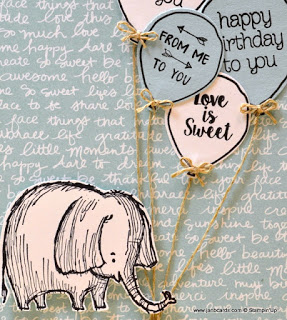 For the fifth and final
balloon, I stamped the large balloon onto a piece of the Pool Party
spotted deisgn from the Subtles DSP Stack. In the centre, I stamped a
sentiment and a small decoration from Ready To Pop Stamp Set inside the
balloon.

I punched all the balloons out using the Balloon Bouquet Punch. 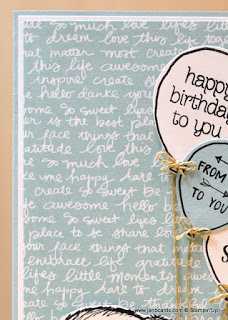 I
adhered the elephant to the card using Dimensionals and cut a very thin piece of
Dimensional to fit on the trunk. I gathered the four strings together
and made sure they were all anchored under the Dimensional.

Do you think
anyone will notice that they’re five balloons and four strings?

I think that’s about it for today. I hope you have a good day. Until tomorrow, happy crafting.