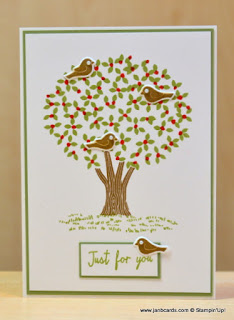 Wahoo! Yesterday was day six of Summer 2016. Today we woke up to find it had rained during the night, which is the best time for rain in my book! LOL! It’s all dried up now and the sun is trying to battle its way through the hazy clouds! 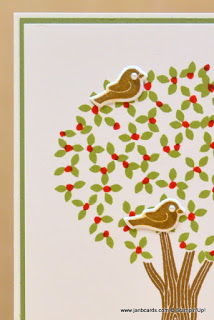 I
took hubby to the hospital for his retina scan yesterday afternoon,
which I’m very pleased to say, went very well. Whatever it is that
they put in his eyes, stings a lot and is very uncomfortable. He really
struggled to keep his eyes open when we left the hospital building to go
to the car. The fact that it’s summer and the sun was shining really
didn’t help! When we arrived home, he laid down and closed his eyes for
about an hour, which was all he really needed for them to calm down.

When
I started making today’s card, I had two criteria. One was to use the
Thoughtful Branches Bundle and second was to create a Just For You card
for a friend. Mission accomplished! I started my card with a base of Whisper White Cardstock, then a layer of Wild Wasabi and a top layer of Whisper White. 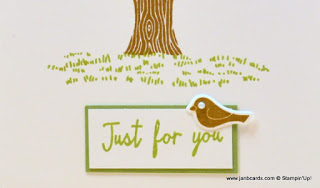 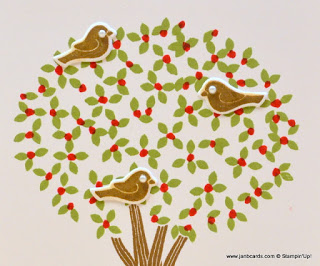 Using
the top layer and Wild Wasabi Ink, I stamped the top part of the
tree about half an inch down from the top edge. I changed to Soft Suede
Ink and stamped the tree trunk so the tops of the branches nestled
comfortably into the foliage. I went back to Wild Wasabi Ink and stamped
the grass so the top of the blades of grass just met up with the
bottom of the tree trunk. This left me with a great gap for my
sentiment.

I thought of several options for this space but decided on this sentiment, which is from the Watercolour Wings
Stamp Set. I stamped it on a piece of Whisper White Cardstock using
Wild Wasabi Ink. Then I layered it onto some Wild Wasabi Cardstock.

I
stamped the top part of the tree on a scrap of paper and experimented with
stamping the apples from the stamp set onto the tree but they looked too
big. I tried a couple of small round stamps I found in different stamp
sets – one was from Botanical Blooms, and the other was from Live, Love,
Grow. Although they were both small, certainly smaller than the apple
that comes in the stamp set, I felt they were still too big! I decided
to colour in freehand using my Real Red Marker Pen. The final touch was
to stamp two west-facing birds and two east-facing birds onto some scrap
Whisper White Cardstock using Soft Suede Ink. Then I die cut all four. 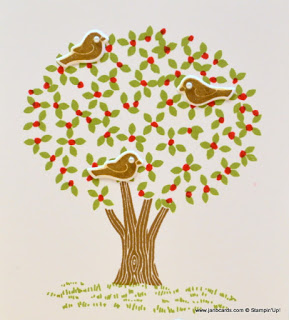 I
adhered the two layers to the card base using Tombow, and did likewise
with the sentiment. I adhered three birds in the tree and one on the
sentiment. Then I painted all four using my Clear Wink of Stella Glitter
Brush. As I said yesterday, I don’t like the look of these birds
without eyes. For today’s card, I experimented using small Pearls for their eyes.
Although I like the look, I’m not 100% about the idea. I think it’s
because they need colour. Next time I use the birds, I’ll paint the
pearls brown before I adhere them to the card.