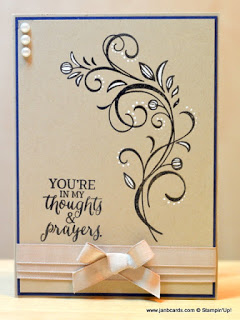 Yesterday I was working on my video for Sunday but I ran out of time to actually record it so that’s the my top priority for this morning………………after I’ve posted my blog!

Today’s card was going to be a sympathy card but  ended as a thinking of you card because I made a booboo! 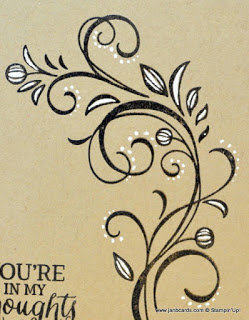 Then I inked it in Night of Navy Ink and stamped it on the top Crumb Cake layer.

I covered it with Clear Embossing Powder and then heat set it.

I used my white gel pen to colour the buds and the leaves.

Then I did a trail of white dots around the outside end of each “scroll”.

I saw this technique demonstrated by France Martin – aka Frenchie – a few years ago. I think she used red acrylic paint on black cardstock but I can’t think what she called it! 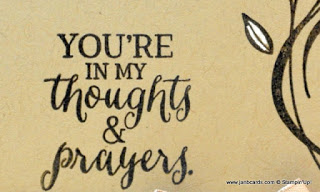 I chose the sentiment from the Rose Wonder Stamp Set and inked and stamped it in exactly the same way as the swirly stamp.

Then I tried to do the same with the With Sympathy stamp from the Rose Wonder Set.

I missed a large part of the word sympathy!

As it’s a photopolymer stamp, I tried going over it again!

I succeeded in creating a superb shadow effect but not quite what I was looking for.

It looked exactly what it was……a booboo! 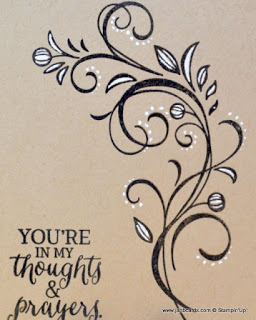 Normally I’d re-stamp the image onto  a piece of Crumb Cake Cardstock and adhere it over the mistake but I didn’t think it would look right!

I decided to lay three strips of Crumb Cake Ribbon, one overlapping the next and hoped it would look like that was part of my original plan!

I tied a separate bow and adhered it halfway along the ribbon, in the centre.

The final touch was to add three large Pearls in a vertical line in the top left hand corner……….in an attempt to cover up booboo number two – a Night of Navy smudge! 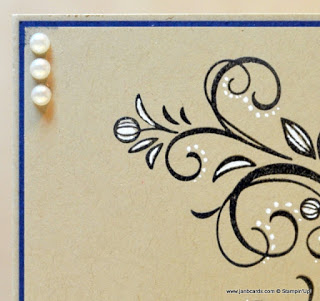 If I’d had more time, I would have started again but there wasn’t, so you’re seeing it, warts and all!

That’s about it for today and I hope you have a great weekend.