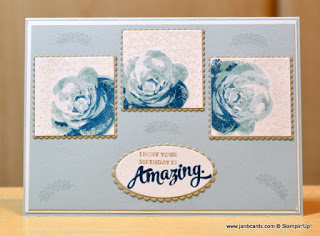 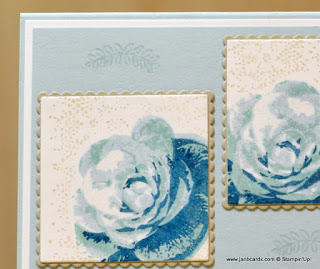 We had our second day of summer yesterday and it was superb! Looks like today s going to be day three. Long may this continue!

Yesterday
was a very successful day in my studio. As well as making Wednesday’s
video, I also made today’s card. The video was requested by one of my
YouTube subscribers and it shows how to make a shaker card using the
Painter’s Palette Stamp Set. I’ve uploaded it to YouTube but haven’t
had a chance to check it yet but will do when I get back from work
today.

Unfortunately I had a migraine shortly before I recorded my
video, so I need to check it to see if my speech is slurred. I have
“aura” migraines which means I get dancing lights in front of my eyes
and can’t focus properly. I’m very fortunate in as much as they only
last for half an hour I but my speech is slurred for some time after!

To
make today’s card I started with a Soft Sky Cardstock base, with a
layer of Whisper White Cardstock, followed by a top layer of Soft Sky. I
adhered them together uysing Tombow.

I
used the Layering Squares Framelits Dies and die cut three squares that were three and five eights square. I’d spent quite some time
experimenting with various colours for the flower. I finally decided on
stamp no. 1 Soft Sky Ink, stamp no 2 Pool Party Ink and stamp no 3
Dapper Denim, gently stamp off first. 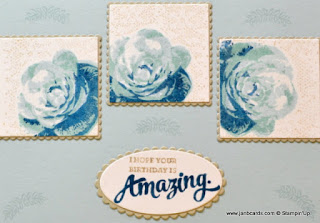 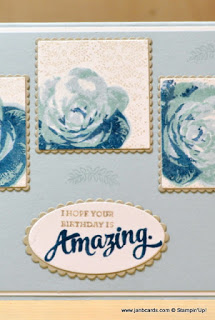 I
stamped the three flowers in various positions on the squares and also
stamped a fourth flower on a Post-It note which I then fussy cut. Using
Shara Sand Ink, I used this to cover the three flowers in turn so I
could stamp the long patterned stamp from the Touches of Texture Stamp
Set on each square horizontally, once at the top and once at the bottom.
Then I used one of the scalloped Layering Square Framelits Dies to die
cut three squares in Sahara Sand Cardstock to layer the flower images
on – really love these new layering dies!

I
used my Crumb Cake and Dapper Denim Marker Pens to paint the sentiment
stamp, which is from the Mixed Borders Stamp Set. I stamped it on a piece of
Whisper White Cardstock and die cut it using a straight-cut die from
the Layering Ovals Framelits Dies. Then, using some Sahara Sand
Cardstock, I die cut a scalloped oval from the same set and adhered it
to the sentiment using Tombow.

Then
I adhered the three flower images to the card front, also using Tombow,
but I staggered them rather than putting them in a straight line. This
left a great space for the sentiment to go. The top layer looked rather
bland, so I used the leaf design stamp from the Mixed Borders Stamp Set
and stamped, tone on tone, using Soft Sky Ink in five strategic
positions! The final step was painting over the three flowers using my
Clear Wink of Stella Glitter Pen.

Today
I’m off to work, which will be the last day for this month and by the
time I arrive home, I should find that my Stampin’ Up! order has
arrived! More new goodies including the limited edition Thoughtful
Branches which will be available during August only!