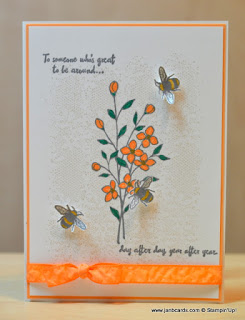 I had a telephone call from the Metropolitan Police yesterday with an update about our burglary last December!

They recently apprehended the suspect who already had a warrant out for his arrest on a totally unrelated case. He went to Court on Tuesday, was found guilty of the burglary, sentenced to three months’ imprisonment, suspended for two years, and ordered to pay us compensation of £150.00.

The lady who phoned said that as far as the police are concerned, the case is now closed unless further evidence against the other two suspects come to light! 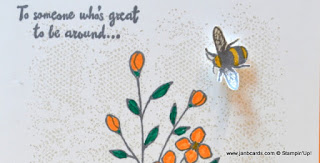 Hopefully, this is the last you’ll here about that unpleasant episode!

On a much happier note, today hubby and I are off out for the day to a place called Tenterden, which is in Kent. 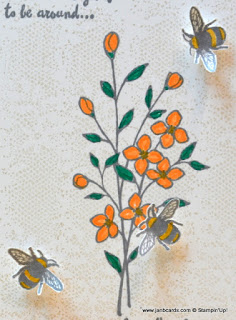 I’ve never been before but hubby has and he remembers it as a delightful “olde worlde” village. I’ll let you know all about it tomorrow.

To create today’s card I used the new stamp set called Touches of Textures. I tend to bypass this type of  grungey set but it’s one of the sets Natalie used for our team training a couple of weeks ago – of course, I was hooked!

I changed to our Archival Basic Grey Ink and stamped the bunch of flowers in the centre. I chose grey instead of black because I wanted to go for a softer look. 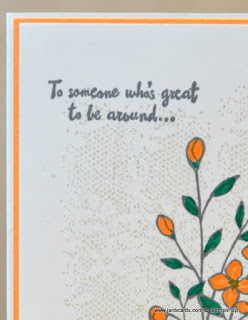 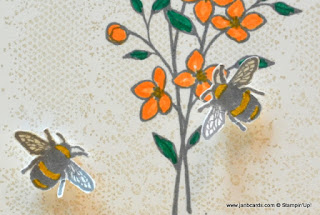 Then I used my Stamp-a-ma-jig again and stamped the two sentiments from the In The Meadow Stamp Set using Archival Basic Grey Ink. I adhered the top two layers together using Tombow.

Still using the Archival Basic Grey, I stamped three bees and fussy cut them. I coloured their bodies using my Delight Dijon Marker Pen. Although it’s not visible in the photographs, I went over the wings using my Clear Wink of Stella Glitter Pen.

I cut a length of ribbon and used my bow maker to made a bow towards one end. I used Fast Fuse to adhere the ends to the back of the card. Making sure I put some Tombow on the ribbon ends, I adhered the card front to the card base. Note to Stampin’ Up! please can we have a bow maker in the catalogue?

I used Dimensionals to adhere two bees flying around and one sitting on a flower.