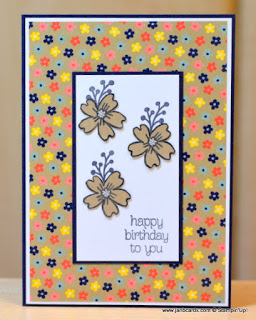 When I
was writing my blog on Monday morning, I wondered if the design of
Monday’s card would work equally as well with other patterns from the
Affecionately Yours Specialty Designer Series Paper (DSP).

Obviously, there’s only one way to find out and that’s to try it!

And that’s exactly what I did on Monday. I made two more cards and then I decided to make a video, which I posted to YouTube earlier this morning! 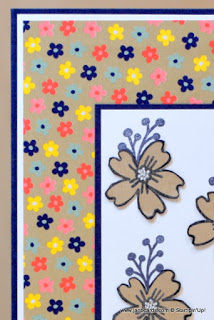 I thoroughly enjoyed trying out different options and thought you may like to see the finished cards, too.

Photographs 1 & 2 – this was quite a big change for me as I used a multi-coloured DSP and I’m normally monochromatic.

Having said that, this is one of my favourite designs in the Affectionately Yours designs.

Most of the time I’ve used this sheet it’s been because I’ve been using the design on the reverse.

Photographs 3 & 4 – this is the design that’s on the back of the multi-coloured DSP I used for the first card! 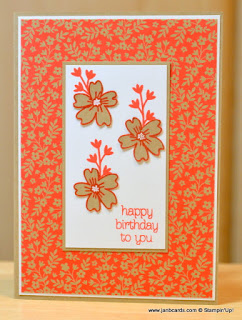 The first card I made on Monday (not the original card) was actually number 3 & 4 shown here because I thought it would look good on Watermelon Wonder Cardstock.

I’m pleased with the overall effect but I’m not so happy the way the Watermelon Wonder layer to the image just blends in with the DSP.

Having said that, I do like the far more definite outline round the outside of the card that Watermelon Wonder gives.

I decided to try using a Crumb Cake for the card base and the layer to the image. 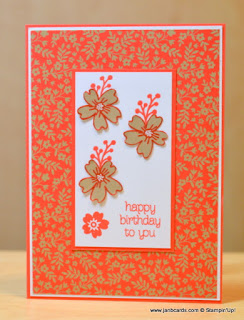 That is, I love the effect of the Crumb Cake layer to the image on the DSP but I’m not so keen on the lighter outside to the actual card.

By the time I’d reached this stage, I wasn’t in the mood to try the third option of Watermelon Wonder card base and Crumb Cake layer for the image – if anybody tries that option, maybe you’ll share it with me! ☺

Photographs 5 & 6 – I also made one slight but very noticeable change to these cards compared with the  original I posted to my blog on Monday morning. 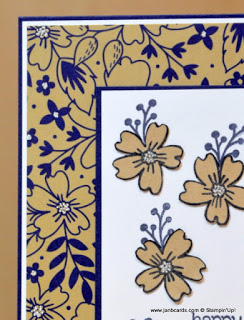 On the original card, I’d coloured the flower centres to the three stamped flowers, as well as the flowers on the DSP, with my Clear Wink of Stella Glitter Pen – not that it really shows up in the photographs!

The main change I made with these three cards, was to use my white gel pen to do lots of white dots in the flower centres.

I think the overall effect of this is better than Wink of Stella, not least because they can be seen a lot more easily!

I think that’s the first time I’ve said I prefer something else to Wink of Stella! LOL!

The last two photographs show the original card, once with Wink of Stella centres and once with white gel pen centres, too. 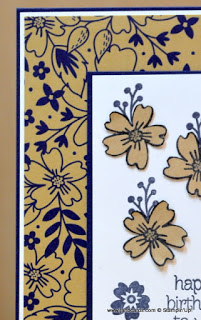 On both before and after cards, I applied this white gel pen and the Wink of Stella to all the flowers i.e. stamped flowers and flower on the DSP!

I think that’s about it for today. I’m off to work now. Until tomorrow, happy crafting.