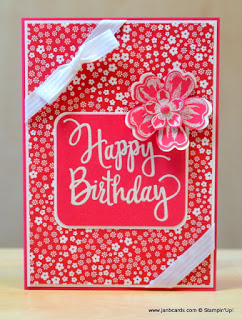 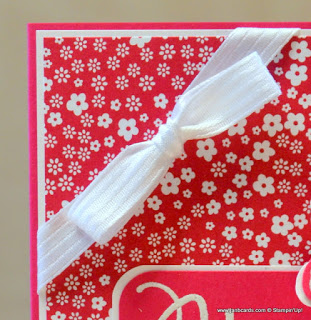 Yesterday was not a good day! I had more email problems! This time it was my general email account. I don’t know what the actual problem was but the consequence was that I didn’t receive any emails for that account for 24 hours! I have always been very careful with my two email accounts making sure I keep my business address purely for business, which means I get masses of emails on my general account. Whilst it was divine not having to deal with the steady stream of emails that normally come in every day, it was a nightmare once they started coming through again! I finally caught up with them all just before bedtime last night!

Today’s card is the third simple card I made on Wednesday – the one I told you yesterday that hubby had said was too busy! He was really referring to the Designer Series Paper (DSP) rather than the overall general design………..I think! ☺

To a certain extent, I agree with him which probably accounts for why I took extra steps to break up certain areas.

To make this card I started with a card base of Melon Mambo with a layer of Whisper White. The top layer is the Melon Mambo flower design from the Brights DSP Stack. In case you didn’t see yesterday’s blog, I’d been working on using DSP as the main image for a card. 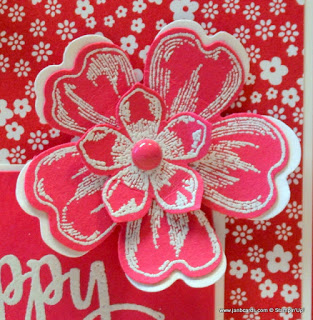 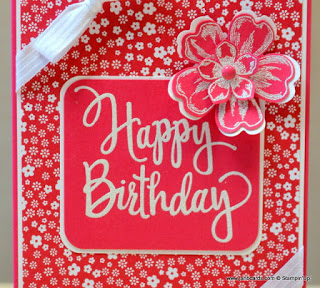 As with yesterday’s card, I took some cardstock the same as the card base and wiped it with my embossing buddy. I took a smaller, second piece of Melon Mambo Cardstock and wiped that as well. I inked my Stylised Birthday Stamp up with Versamark, stamped and sprinkled White Embossing Powder over it. Then I took a flower from the Flower Shop Stamp Set and one from Petite Petals Stamp Show. I inked them both in Versamark, stamped and then sprinkled them with White Embossing Powder. I used my Heat Tool and melted the embossing powder on all three images.

I rounded the corners of the sentiment using my Project Life Corner Rounder. I used the Pansy Punch and the Petite Petals Punch to punch out both flowers. It was at this stage that even I thought the card was looking too busy, so I added three extras to remedy this. 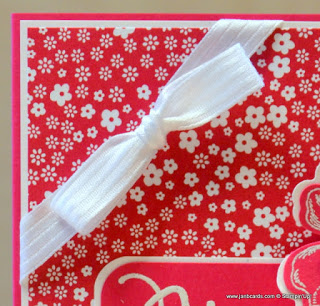 I adhered the DSP onto the Whisper White Layer using Tombow. Then I put some SNAIL on the back of this and attached a piece of the 3/8″ Stitched Satin Ribbon across the botton right hand side corner. I cut a longer piece of ribbon and used my bow maker to make a bow halfway along. In the opposite corner to the first piece of ribbon, I applied some SNAIL. Then I attached the ribbon making sure it exposed a bigger triangle than the smaller ribbon at the bottom!

When I was happy that I had position the ribbons correctly, I adhered the layer to my cardbase using Tombow, making sure I added some to the back of the ribbon. 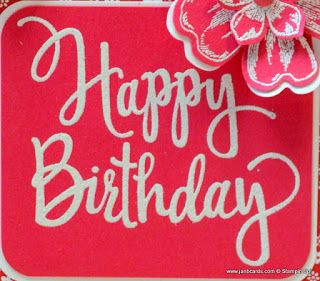 I adhered the sentiment onto  a slightly larger piece of Whisper White Cardstock and rounded the corners. Then I adhered it to the card front with Tombow.

The final touch was a metal Candy Dot in the centre of the flower. If I hadn’t had that leftover from the Spring catalogue, I would have used a pearl.

I’m pleased with how my card turned out but I can see why some people, like hubby, will consider that it looks “too busy”! But that’s OK, I can live with that. ☺