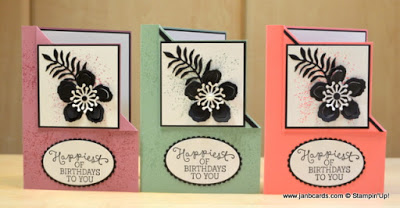 This morning I uploaded my video which shows how I made the Corner Fold Card I shared with you on Thursday. 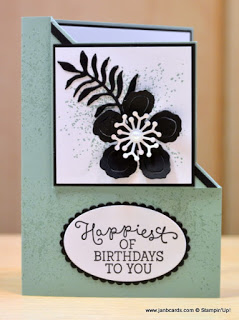 I
made the original card in Flirty Flamingo and the second card in
Sweet Sugarplum. For the video I chose Mint Macaroon. I really don’t have a
favourite, I like them all!

Before
I made the video I had to find a way to score the fold lines rather
than just folding without scoring. Folds that have been scored first are
much neater by a very long chalk!

When I was making the second card and
I reached the point of folding the corner over, it was very easy to see
how and where to score. This is just one tip I give in the video. 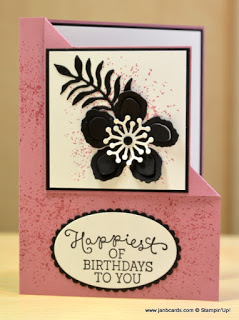 As
far as the design of the first card was concerned, the only part I had
doubt about was the actual cardstock on the front.

I thought it looked
too plain so on the Sweet Sugarplum card, I used the splatter stamp I’d
used under the flower on the card front.

I think they both
look nice and I really don’t prefer one above the other. 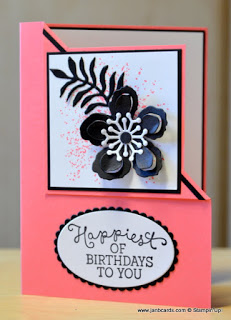 I
decided to leave the black diagonal strip off the second card. The
reason I’d put it on the first card was to cover up some creasing that
occured when I folded the corner over without the help of a score line.

Obviously, I didn’t need it for card number 2. However, when I’d
finished the card, I thought it would have looked better with the strip!
LOL! That’s why I decided to include it in the design on the third
card.

As
I added the stripe as an after thought on the first card, and I’d
already adhered the image to the foldover, it was quite fiddly to cut
the diagonals to fit the straight edges.

It was so much easier to add a
complete strip to the Mint Macaroon card before the image was adhered
in to place!

I
think the only other differences between these three cards are the
centres to the flowers. 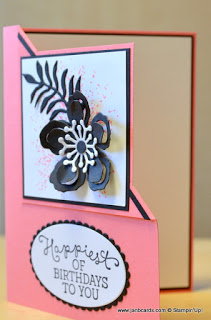 Card number one was a punched black circle; card
number two was a retired metallic candy dot; card number three was a
Pearl.

Again, I think all three options look equally as good as each
other.

I can’t remember a time, when I haven’t been able to choose one card out of three, which I think is better than other two!

Overall, I’m really happy with this style of fancy fold and will certainly be using it again.

I wish you a happy Sunday and until tomorrow, happy crafting.