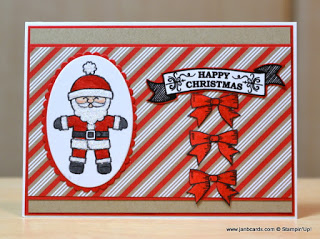 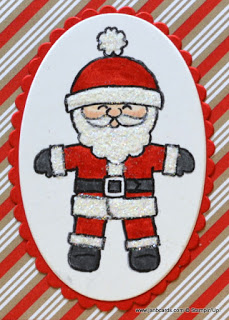 I
finally gave in yesterday and started playing with my Christmas pre-order
goodies! I always love Santa’s and greenery like holly and mistletoe. There’s
no shortage of either in this year’s new catalogue, which goes live on 1st. September 2016.
I’m
not 100% happy with today’s card because I think it would have looked better if
I’d adhered the sentiment to the top of the stripe Candy Cane Lane Designer Series Paper (DSP)
and then spaced the bows evenly down to the bottom of the DSP. Never mind, my
cards tend to evolve when I’m making them rather than having the idea already
fixed in my mind.
I
started with a card base of Shimmery White Cardstock, with a layer of Real Red
and then a top layer of Crumb Cake. Then I had a double layer which is the same
width as the card but not as tall, so it left about half an inch of Crumb
Cake exposed top and bottom. This double layer was real Real Red and a top
layer of the red & white stripe design from the Candy Cane Lane DSP. 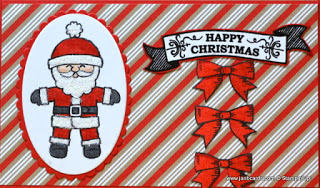 Using
Archival Basic Black Ink, I stamped the Santa Claus from the Cookie-Cutter
Christmas Stamp Set onto some Shimmery White. I used the Real Red and Archival
Basic Grey Marker Pens to colour him in. I coloured his face using the retired
Blush Blossom Marker Pen. Stampin’ Up! (SU) brought this marker out of
retirement for just one year about three years ago. It’s a super colour for
skin and it’s a shame SU don’t keep it as a standard colour! If they do ever
bring it out of retirement again, I really recommend you get one! I added some
liquid glue to the bobble on the hat, the cuff around the hood, the jacket
and trousers, beard and moustache and sprinkled with Dazzling Diamonds. This
really makes any image really POP! 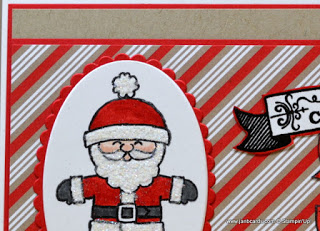 I
die cut the image using a straight cut die from the Layering Ovals Framelits Dies and layered it onto a Real Red Scalloped Oval which I’d die cut with a scalloped oval
die from the same die set. I chose the sentiment from the
Seasonal Bells Stamp Set and heat embossed it using Basic Black Embossing
Powder. Unfortunately, we don’t sell this anymore but you can use our Archival
Basic Black Ink – immediately after stamping, sprinkle it with Clear Embossing Powder and
then heat set it! 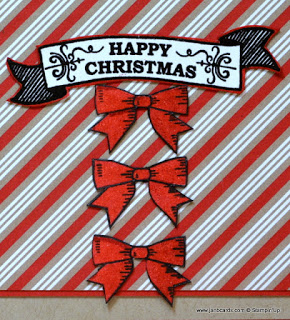 There is a die for this image in the Bunch of
Banners Framelits Dies. My plan was to fussy cut the embossed image and layer
it onto a Real Red die cut. For some reason the die didn’t line up with my
image. I can only assume I didn’t lay the stamp on my block very straight. I’ll
try it again later today. I moved onto plan B which was to fussy cut the banner,
making sure that I left a small white edge all round! Then I painted the white
edging with my Real Red Marker Pen. It worked a treat! I adhered it in place, which
is what I shouldn’t have done at that stage!

I
wanted to add a stamped bow. I chose the two-step stamping bow that’s in the
Holly Berry Happiness Stamp Set and has a coordinating punch. Using Archival
Basic Black Ink, I stamped the outline image onto a piece of Shimmery White,
then stamped the background stamp using Real Red Ink. Although it’s quite easy
getting the colour lined up, I kept finishing up with a very straight white area in one place
or another. This was amazingly easy to fill in using my Real Red Marker Pen. Then I
punched the bow out, using the Holly Berry Builder Punch.

It was at this stage
that I decided three bows would look nice. I stamped two more bows and fussy
cut all three of them. I could just about get them onto the DSP if they touched
each other top and bottom. I didn’t want that, so I spaced them out and allowed an overhang. The final
step was to paint over the bows using my Clear Wink of Stella Glitter Pen. It’s
not visible in the photographs but it looks lovely in real life.
I hope you have a great weekend. Until tomorrow, happy crafting.
JanB.