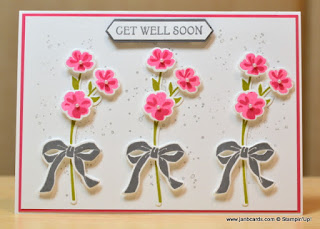 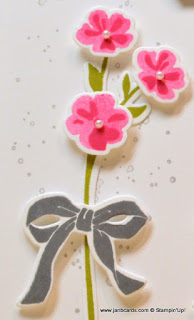 Yesterday I had another play with the Jar of Love Stamp Set and the
matching dies, which are called Everyday Jars Framelits. The ideas I
started my card with were the stamp set and the card base.

When I was preparing yesterday’s video – Revertsed Double Cutain Fold, I made a card base for the card I
was making but, unfortunately, I’d adhered all the layers
together, forgetting I needed wrap the curtains around the top two
layers first! 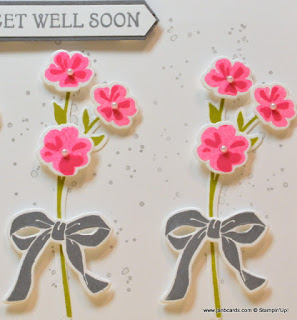 Using
Smokey Slate Ink and stamping off twice, I stamped the splatter stamp
from the Gorgeous Grunge Stamp Set horizontally across the front of the card three
times, turning it 180° after each stamp.

Using Melon Mambo
Ink, I stamped the darkest image first, and then I stamped the Melon
Mambo Ink off once for the background image of the flowers.

Then
I die cut all the images. Once they were all done, I arranged
the images in various layouts on the card base trying to decide what I
wanted to do with them.

I started with a bouquet and worked my way
through various arrangements down to a single stem. I decided I liked
the triple stems layout the best. 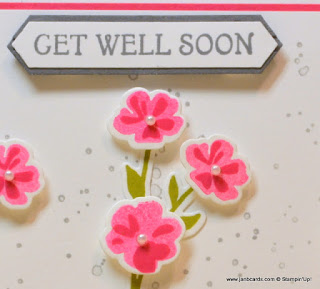 It meant I had three of the larger flowers
left over but that’s OK- they’re ready for a future project!

For each of the three individual stems, I chose two small and one larger
flower each. I used my now retired Two Way Glue Pen the adhere the stems to
the card base. 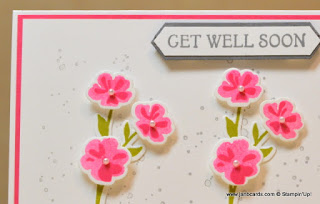 The nine flowers and three bows were adhered with thin
short slices of Dimensionals!

It was a toss up between tiny Pearls in
the centres of the flowers or dots drawn with my white gel pen – the
Pearls won!

Finally,
I chose the Get Well Soon sentiment from the Hopeful Thoughts Stamp Set. Using Archival Basic Grey Ink, and Whisper White Cardstock, I stamped
the sentiment and punched it out using the Classic Label Punch. I also
punched two more out in Basic Grey Cardstock.

I cut one in half
horizontally and adhered them behind the sentiment top and bottom. 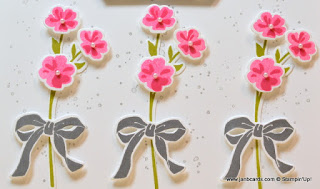 Then I
cut both ends off the second Basic Grey label, so they were about half
and inch long and adhered them at either end of the sentiment so it
looks just like a normal layer! Then I adhered the sentiment to the
card front with Dimensionals.

That’s about it for today. Until tomorrow, happy carafting.