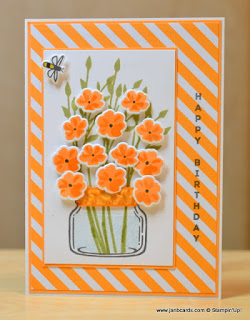 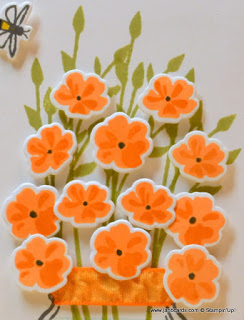 Yesterday
I had planned to make my video for Sunday and knew exactly what I was
going to do. In the morning I received an email from one of my YouTube
subscribers asking if I could do a video on a particular design.

Susan
explained she had seen a tutorial on YouTube but found it difficult to
follow. By the description she gave me, it was easy to guess which design she was referring to and I
said I’d check it out.

I watched the video Susan had seen and I could
appreciate why she found it difficult to follow. It’s a great design so I
found more tutorials to watch so I could learn the pros and cons,
things to watch out for, and of course to decide
whether there was any point in me doing a video!

While I was playing with the design, I came up with a variation to the design that I hadn’t seen during my YouTube search! I made three cards, all the same design but with variations, including my spin!

Today I’ll make the video, get it
uploaded, edited and ready to post on Sunday. I’m really excited and
can’t wait to share this with you!

After
I’d finished the design work for Susan’s video, I started on today’s
card. As I said on my blog yesterday, although I liked card 2, I
wasn’t happy with the sizing of the image and felt the jar should have
been smaller. I chose the smallest jar and the two small flowers for
today’s card. I’m so much happier with the positioning and sizing of
the image.

I
started the card with the same three layers as yesterday but changed
the colour to Peekaboo Peach. I took a piece of Whisper White Cardstock
for the image that I judged to be the right width but was far too tall.
Using Archival Basic Grey Ink, I stamped the smallest jar about 1/4″ up
from the bottom.

I made a mask for the base of the jar so I could stamp
the stems into the jar but they wouldn’t pop out the bottom of the jar!
Using Pear Pizzazz Ink, I stamped one of the sprigs of leaves and used
this as a guide to calculate how tall I wanted my cardstock to be. When I
had decided what height I needed, I cut the excess cardstock off and
then cut a layer in Peekaboo peach.

I
stamped a few stems and lengthened the stems that had fallen short using
the single stem stamp. Then I stamped the water in the jar using Soft
Sky Ink stamped off once. 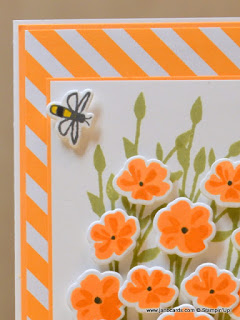 I used my craft knife to cut a slit in each
side of the jar at the top. I threaded a piece of the Peekaboo Ruched
Ribbon through the slits and adhered them at the back using Fast Fuse.

I
chose to use the smaller flowers and was really pleased to find the two flowers were on one stamp! I stamped the darker
layer first using Pumpkin Pie Ink amd then did the lighter all-over
stamp using Peekaboo Peach.

Then I die cut them out with the coordinating
die which allowed me to do both flowers at the same time. It saved so
much time having the stamps and the dies doubled up – it’s a great
idea. Well done Stampin’ Up! and THANKS! ☺

I arranged the flowers on my image where I wanted to adhere them. When I
was happy with the arrangement, I used Dimensionals to adhere them in
place. 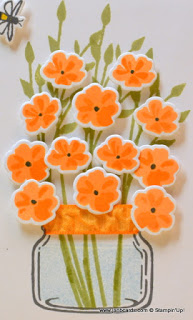 The final step was to stamp the bee. Well, I think it’s meant to
be a Glow Worm – I’m not sure! – but on my card, I’m using artistic
license and he’s definitely a bee! I adhered him with a partial
Dimensional.

I
stamped the sentiment from the Vertical Greetings Stamp Set directly
onto the card front using Archival Basic Grey Ink. I adhered the image
in place using Tombow and my final step was to paint the water
using my Clear Wink of Stella Glitter Pen.

Well,
I must get on, I have a video to make so I can leave it uploading while
I go off for my manicure at lunchtime! I hope you have a great weekend.
Until tomorrow, happy crafting.