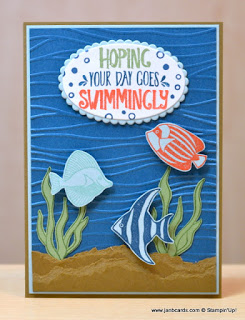 I
have to share my good news with you! I went to see a new consultant
yesterday evening for a second opinion on my back. It’s 99% certain that
he’s going to give me my second Steroid Block Epidural! YAY! He was so
positive and said there are several different options open to me, I left
the hospital with a skip in my step and a massive light at the end of
the tunnel!

I also had a great day in my studio yesterday! I had my first play with the Seaside Shore Stamp Set. 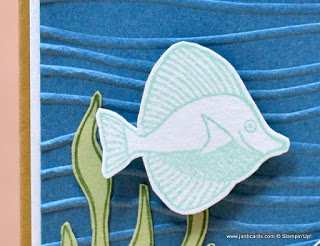 There
aren’t any coordinating dies but it’s no problem because all the images
are pretty easy to fussy cut. I think the only two stamps that might be
fiddly are the two starfish, which I didn’t use!

I
started my card with a base of Soft Suede Cardstock , with a layer of
Pool Party and a top layer of Dapper Denim. I dry-embossed the top layer
using the Seaside Embossing Folder. I used Tombow to adhere the three
pieces together. To create the sand, I took a strip of Soft Suede and
tore it towards me, about two thirds of the way down. 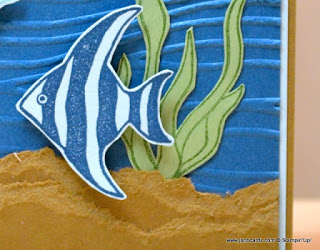 I adhered the
larger piece with the torn edge uppermost. I took the thinner piece,
turned it over so the torn edge was uppermost and adhered it on top of the
first piece.

I
stamped the three different fish that are in the stamp set onto Pool
Party Cardstock. The three colours I used were Dapper Denim, Calypso
Coral and Bermuda Bay – I chose this because I thought tone on tone with Pool Party may
have been too light. 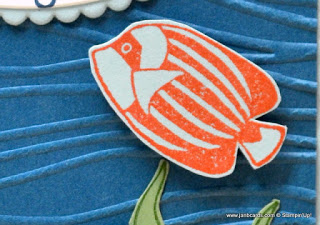 I also
used Dapper Denim to stamp the water bubbles around the sentiment. Then I
used the Layering Oval Framelits Dies to die cut the sentiment as well as
a Pool Party Scalloped Oval to layer it on.

I
used Tombow to glue the seaweed onto the card front. I used my craft
knife to gently lift a small bit of the sand so  could slide the base
underneath. 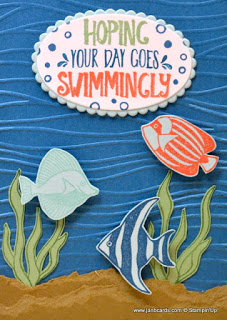 I put Dimensionals on the back of the fish and adhered them
to the card front. I think all the cards I’ve seen using this stamp set, the fish are swimming in a straight line so I thought
I’d buck the trend and have one of mine swimming upwards!

Before I go, a quick funny story about my appointment yesterday evening. We arrived very early, so to kill time, hubby was doing something with the settings on his new TomTom (satnav). All of a suddden, this man’s voice boomed through the waiting room “You have reached you desination”. Everyone burst out laughing and looked round at hubby, who was hoping the floor would open and swallow him up! LOL! ☺