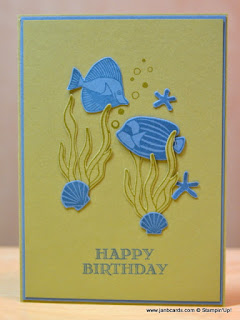 Yesterday
I spent my day, first of all designing, and then making, a special
bookmarker that I’m going to send out to all my customers, with the new
Christmas catalogue. Unfortunately, I never do “quick & easy” so this is quite a mammoth task and is going to take up most of my weekend!

I’m so pleased with the idea I came up with, I’ll be making a video which I hope will be
ready for next Wednesday. All my customers should have received their catalogues by then! 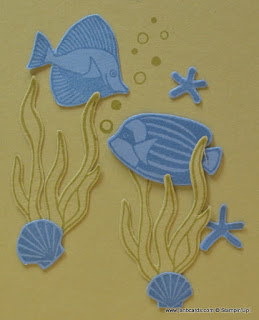 I’m not going into the details because I don’t want to spoil the surprise for my customers! ☺

While
I was working on these gifts yesterday, I had YouTube playing on
my iPad. It was on autoplay and the videos all featured the Limited
Edition Thoughtful Branches.

I decided that I’d create a card for today
using the set! As you can see it didn’t quite work out according to
plan! LOL. 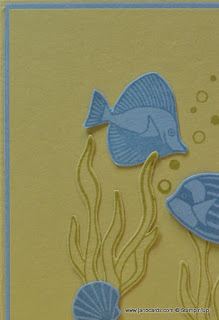 I started making the hydranga but I just didn’t feel I could
do something different. I think having seen so many great ideas during
the day, I’d OD’d on Thoughtful Branches.

Instead, I decided to have my
second play with Seaside Shore – no idea why I chose that one but I’m so
pleased I did.

The
style of this card is so unusual for me but I love it! I’ll certainly use this idea again.

My original idea was to have just the fish and the seaweed as
you see it now, but I was going to put a top layer of Marina Mist that
had a circle cut out of it, rather like a porthole window.

I had die cut
the circle and then dry embossed the layer using the Seaside Embossing
Folder.

When I was about to adhere it on top, something made me
stop and I decided I liked the scene as it was. 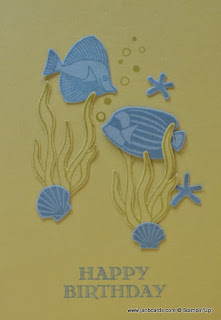 Using Marina Mist Ink
and Cardstock, I stamped and fussy cut one each of the two shells, as
well as the two starfish.

Then I adhered them in place, making sure I
kept my scene just in the centre of my layer.

As
I always cut my card bases and layers to the same size and I like a
total of three layers, I was now one short!

I’d already adhered the Pear
Pizzazz layer to my Marina Mist card base, so I cut the base in half,
effectively making it the second layer. Then I took a piece of Pear
Pizzazz and cut it a bit larger than normal and adhere the layers to it. 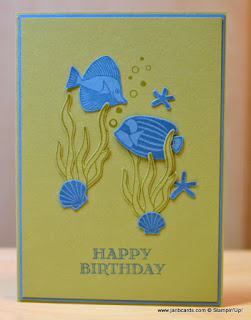 My finished card was 1/4″ taller and wider but it still
fits into one of our regular envelopes.

The only parts I stamped directly onto the layer are the bubbles and the
sentiment, which is from Guy Greetings.
I’m so pleased with my finished card – I feel it looks very
clean and airy!