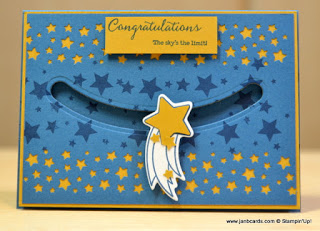 What
an absolutely lovely time I had in Peacehaven yesterday. It was a lovely
group of ladies, and everybody enjoyed the three projects I’d arranged
for them – especially the 3D project, as they received a bar of chocolate
to go with it!

Before I headed home, I stopped at the top of the cliffs
to breathe in some lovely sea air and to enjoy the view – see
photograph number 4! 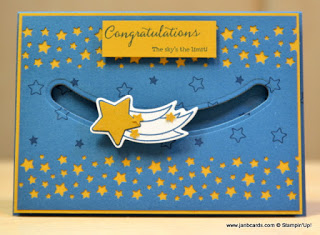 This
morning I uploaded my video called Shooting Star Slider Card. I’m so
pleased at how this card turned out because it slides side to side
brilliantly.

I also found the Confetti Stars Border Punch really came
into its own on this card as well!

The
first card was without any additional stamping because I was
concentrating on making sure the mechanics would work alright. See photograph 3.

The big
secret for success using the die from the Sliding Stars Framelits Dies is
to  cut the “slide” as a smiley face not as a scowling face! On the
video, I showed the difference in the quality of the slide between the
two – you may be amazed!

On the
second card I made, I stamped some stars on the layer behind the slider
as well as on the top layer using one hollow and one solid star from the
Shooting Star Stamp Set. 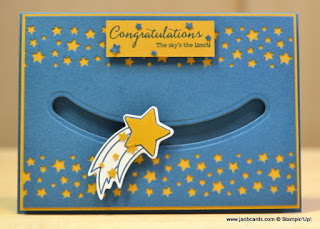 I think it made my card look more interesting
than the first card. See photograph 2. 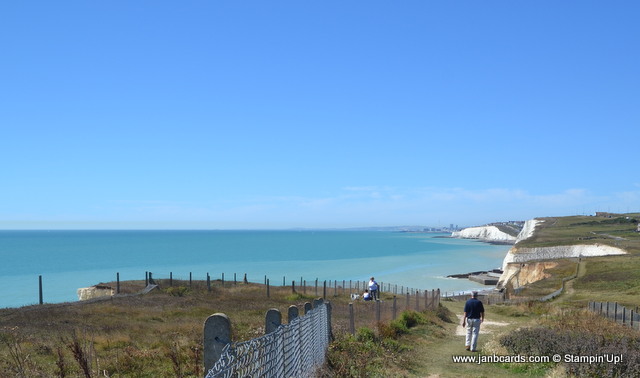 I
changed the stamped stars on the card I made on the video because I
wasn’t sure that I liked the hollow stars on card number 2. The stars I
chose for this card are from the Perpetual Birthday Calendar Stamp Set
and I’m really pleased with the effect! See photograph 1.

There
are two other extras I put on card number 1, which you may have noticed in
photograph 3. On the sentiment I adhered some of the Dapper Denim
punched out hearts. I also added extra Delightful Dijon stars on the
tail of the shooting star – I’m planning on adding extras to cards two
and three as well! 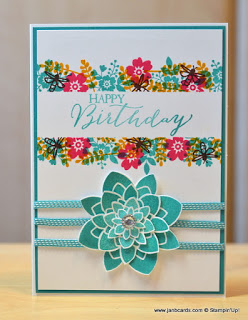 In
yesterday’s post I shared one of the cards I’d planned for the
Peacehaven ladies and said that I would arrange the ribbons slightly
differently and share a photograph of it today – please see photographs
5. I much prefer the three straight lines, what do you think?