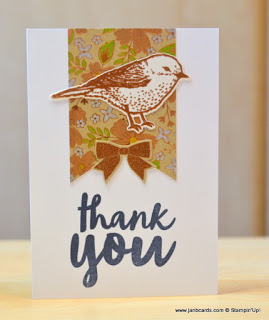 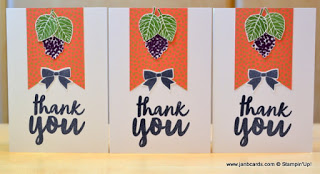 To
make this month’s Thank You (TY) cards I decided to use the Thank You
So Much stamp from the Thankful Thoughts Stamp Set. I only wanted the
Thank You so I decided to cut the bottom half off. It all went well
until I decided to trim off what I considered to be excess rubber around
the edge! Then it happened! I cut part of the cross bar to the letter T
off.  Talk about lucky! If I didn’t tell you I had done it, you might
not notice. If you have a look at the stamp set in the catalogue, page
39 – it’s the largest stamp in the centre. See how long the cross bar on
the T is, then look at my Thank You cards. Phew! Will this stop me from
doing this again? No, I’m afraid it won’t! 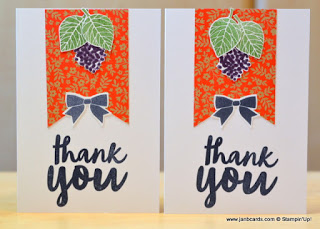 (IMPORTANT
NOTE: if you decide to seprate stamps, or trim excess rubber off the
edges, it will make your guarantee with
Stampin’ Up! null and void because you have effectively damaged the
stamp
yourself. The reason I don’t worry about this is because the quality of
our stamps is second to none and I don’t expect to have any problems, apart from self-inflicted ones,
with the stamps). 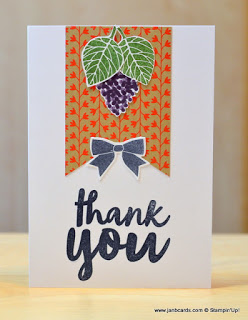 Yesterday,
I didn’t have any idea for a design for my TY cards and decided to do
something that would use scraps of Designer Series Paper (DSP). I used
my Triple Banner Punch and punched out 3″ long banners. This left plenty
of room for me to stamp Thank You at the bottom, below the banner. All
the DSP I used was from the Affectionately Yours Specialty DSP. I decided
to have a look through the box I keep on my desk where I keep stamped,
punched, die cut shapes and images that were left overs from previous projects, to see if
anything would inspire me. I found so many that would be suitable that I
decided to use them all!

I was happy with them when I’d finished, but they were missing something! Then I saw a Copper Embossed Bow that was a leftover from yesterday’s Christmas card. It went beautifully with the bird and two others – details below. For the others, I stamped the bow from the Holly Berry Happiness Stamp Set and punched them out with the co-ordinting Holly Berry Builder Punch. The bows finished my cards off beautifully! 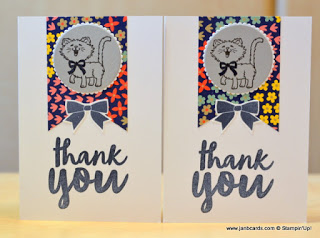 Photograph 1 Bird – the DSP was the copper embossed sheet from the pack that I had coloured using Sharpie Pens. The bird is from the Best of Birds Stamp Set.

Photographs 2 – 4 Grapes – I created these when I was playing with the Limited Edition Thoughtful Branches Stamp Set (only available until 31.08.16). I used some to decorate a Tag-a-Bag I was giving to someone as a gift but I had leftovers that I never got round to using, until now, that is! 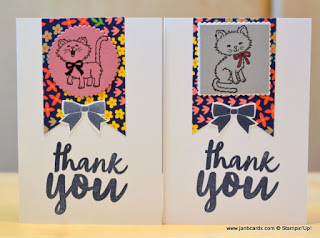 Photographs 5 – 6 Cats – these were left overs from the Kitties on the Wall card and video I made.  I used the Layering Circles Framelits Dies to die cut the two cats in photograph 5, as well as Whisper White scalloped circle for the layer. The pink cat in photograph 6 was already die cut in a circle, so I die cut it in a smaller circle and layered it onto a Whisper White scalloped circle. I did the same for the right hand cat except I used the Layering Square Framelits Dies. 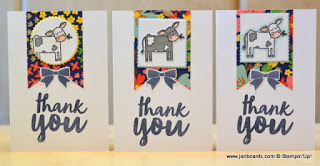 Photograph 7 Cows – the first cow was too small to die cut in a square so I used circles but unfortuantely it mean’t she lost her tail! The grey cow had been fussy cut so had to be adhered to a square first and then a layer. The third cow was a straight forward square die cut with scalloped square layer. I made these when I was working on the birthday cards that had the added sentiment “HAVE AN AWARD WINNING DAY”. 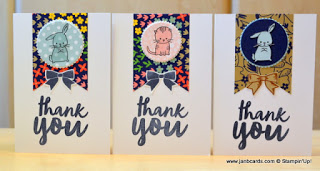 Photograph 8 Made with Love – I made the first two images when I made the New Baby spinner card and video. The blue bunnie on the right hand side had been fussy cut and was for a New Baby card. I adhered him onto a Night of Nave square and then a Pool Party scalloped circle. This is one of the images that I used a copper embossed bow, but the outline image this time. 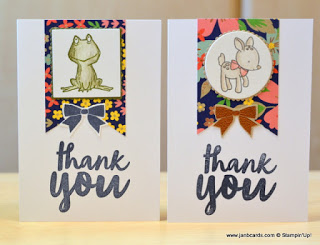 Photograph 9 Frog and Deer – I made the frog when I working on the cards using the fabulous hostess stamp set called Love You Lots. The Little Dear, which is from the Made With Love Stamp set was made when I was working on some new baby cards. This one also went well with the Copper Embossed bow as there is some copper embossing in the sheet of DSP I used for the Banner.

That’s the first batch of TY cards made, today I will making another batch. I need to make sure they are all made by the end of the month so I still have quite a bit of time left.