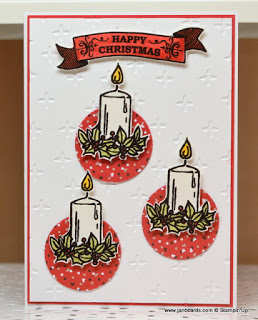 WOW! What a reaction I received to yesterday’s Santa card when I posted it to Facebook.

I was absolutely amazed at how many people felt the same way about Santa’s ears as I do!

I
was also amazed at how many people who said they weren’t going to buy
this set because they didn’t like Santa the way he was but would do now
they’ve seen him earless!

For today’s card I had my first play with the Jar of Cheer Stamp Set. 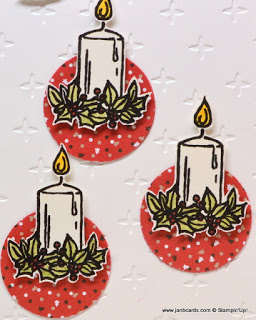 My original idea was to use the image of the three baubles and holly and stamp it inside the jar.

I didn’t like the image stamped with Basic Black Archival Ink so I used our retired Black Embossing Powder.

Although I like the image, by the time I’d finished painting it, I really didn’t like it and binned it!

As
you know, I don’t really like anything that’s multi-coloured so I moved
onto my second choice, which was the candle – only three colours
needed! 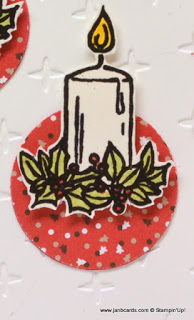 I embossed the top layer using the Sparkle Embossing Folder and decided I’d use the debossed side for this card.

I get excellent results with my embossing since I started using my new Big Shot Platform, it’s brilliant!

The
only problem with using the debossed side, is that it’s more difficult to attach it to the
next layer because there’s very little embossed  areas to put Tombow
onto.

However, I successfully adhered the three layers together using Tombow.

I used our Shimmery White Cardstock for the images, and wiped over the surface with my embossing buddy first.

Then I used Versamark to stamp three candles and the sentiment from the  Seasonal Bells Stamp set.

I coloured the sentiment using my Real Real Marker pen and then cut it out by hand. 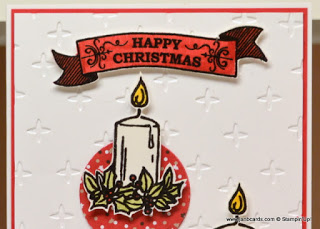 I
fussy cut the three candles before colouring then because I sometimes find the
red ink takes a little while to dry and I finish up smudging it!

I used the Real Red for the berries, Pear Pizzazz for the leaves and Daffodil Delight for the flame.

I punched three 1 1/2″ circles from the Candy Cane Lane Designer Series Paper (DSP) and three from the Real Red Cardstock. 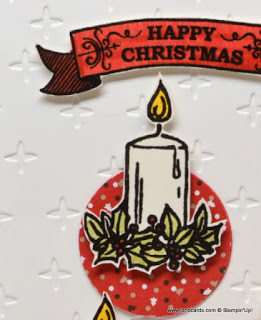 I adhered the DSP circles to the cardstock circles, and then adhered them on the card front.

I’m off to work today, the only day this month! Until tomorrow, happy crafting.