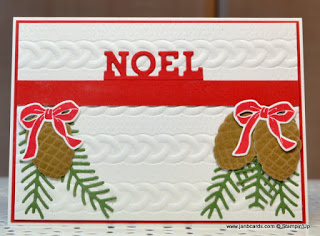 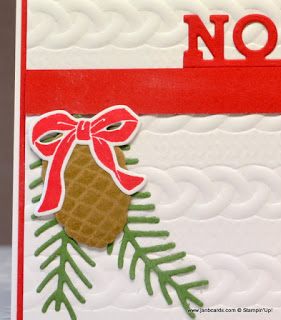 Today I launch a new page here on my blog – Retired Products For Sale. (As per Stampin’ Up! rules, I can only sell to addresses in the UK, the Netherlands, France, Germany and Austria. I’m really sorry about this!)

Yesterday I decided to have my first play with the Christmas Pines Stamp Set and the coordinating Pretty Pines Thinlits Dies. The first job I did was to get a piece of cardstock and die cut one of each of the thirteen dies that are in the set. Once they were all sorted out, I adhered them to the back of the cardboard that the magnet, which was holding the dies, was attached to.

I have started taking out the instruction sheet that comes in the packet of dies, so I can look on one side and see the dies, and on the other side to see the die cuts! 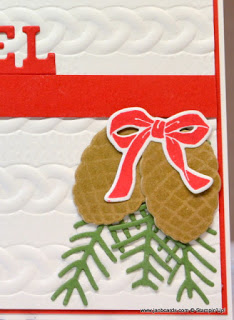 This top layer had already been embossed a few days ago, using the Cable Knit Dynamic Embossing Folder, but wasn’t used for a project at that time. For today’s card, I chose Garden Green for the pine branches and die cut two of each of the three sizes.

The large and small pine cones are both three step stamps and I chose the larger one one for my card. I played around with a scrap of paper while I tried to find a colour combo I liked. I finally decided on using Crumb Cake Cardstock and stamping Crumb Cake Ink for all three steps, and all as first generation. When the ink had dried thoroughly, the pine cone looked a good colour, so I die cut all three of them. I also die cut the NOEL from the Christmas Stockings Thinlits Dies.

I stamped two bows from the Jar of Love Stamp Set using Real Red Ink onto Whisper White Cardstock. I die cut them using the coordinating die from the Everyday Jars Framelits. Then I was ready to start assembling my card.

I adhered the two layers to the card base using Tombow. I took a strip of Real Red that was long enough to go from side to side and trimmed off a little bit that would overhang. I trimmed off the two “shelf” pieces on either side of NOEL and adhered the word on top of the red bar!

Then I started arranging the pine branches in different ways. The two longest branches that I’d die cut were too long for this card so I cut them to the correct length.

Then I wondered if I could use the off cuts, and the answer was yes, I could! I trimmed the pines at the end where I had detached it from the lower part, and gave it a “haircut” by cutting the longest three pine
needles on each side at an angle, with the
shortest ones at the bottom.  I used my paper snips and rounded the corners of the six pine needles as best I could. The end result is the pine bough in the centre of the three on the right-hand side. Once you know that’s what I’ve done, you can see it, but otherwise, I don’t think it’s noticeable! Ta da!