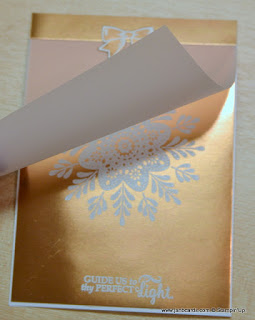 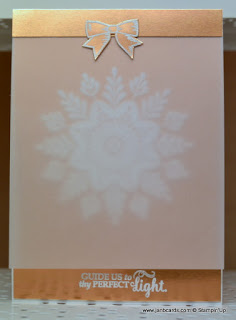 I had a delightfully busy afternoon in my studio yesterday! My first project was a birthday card for our dear friend in Aylesbury, who’ll be 90 on Monday. Then I designed my swaps for team training on Sunday – I managed six and have another 16 to make today. I’m thinking it’s worthy of a video! Finally, I made today’s card, which turned out to be a bit of a challenge!

I decided to play with the Frosted Medallions Stamp Set. Although it’s a fair bit smaller, the main image reminds me of a background stamp Stampin’ Up! used to sell called Medallion. It was a beauty!

My idea for today’s card was to heat emboss the image on Copper Foil and then put an overlay of Vellum on top. The problem with vellum is that any type of glue will show through, some more than others.

Ideally, I would have liked to have some copper ribbon to wrap around the top to cover the glue but that wasn’t an option, so I decided to use some Copper Foil instead – two variations shown here.

I started my card with a tent fold base of Whisper White Cardstock with a layer of Copper Foil. I placed the clean stamp where I wanted to stamp the image and put my Stamp-a-ma-jig in place. Then I inked the medallion in Versamark and stamped it very carefully onto the Copper Foil – the Stamp-a-ma-jig stopped the stamp from sliding over the foil. I sprinkled Copper Embossing Powder over the image and heat set it.

The first time I tried this, the Copper Foil bubbled. I had heard this can happen but this is the first time I had experienced it. I re-did it but I kept moving my Heat Tool around to avoid this happening again – success! 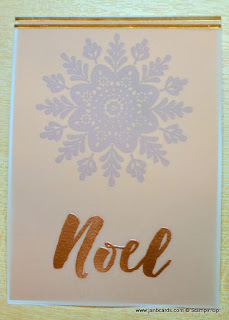 I chose the NOEL stamp from the Christmas Pines Stamp Set and heat embossed it using the Copper Embossing Powder on the Vellum. It looks brilliant but I think for the overall design of this card, I think it would have looked a lot better if I’d done it on the Copper Foil.

To cover the Fast Fuse I’d used to adhere the Vellum to the card front, I used two 1/16″ strips of Copper Foil.

I followed the same process for the second card but used White Embossing Powder instead of Copper. Needless to say, this shows through the Vellum a lot more definitely.  Photographs 1 – 4. 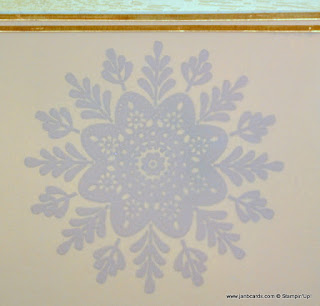 To cover the Fast Fuse on this card, I adhered a 5/8″ strip of Copper Foil across the top. To balance this out, I trimmed 5/8″ of Vellum off the bottom. I heat embossed the sentiment from the Star of Light Stamp Set using White Embossing Powder on the bottom strip that was visible.

I also heat embossed in white the bow outline stamp from the  Holly Berry Happiness Stamp Set and punched it out using the Holly Berry Builder Punch. I adhered it to the top strip using two Glue Dots.

I definitely prefer this second card out of the two of them. If I were to re-do the first card, I’d heat emboss the sentiment onto the foil and shorten the length of the Vellum.