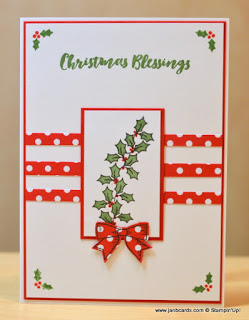 Yesterday
was a rollercoaster for my emotions! I was so excited to
receive a telephone call from my consultant’s secretary, who told me he’d
seen my MRI results. Helen told me he recommended that I have the
injection in my facet joints! I was over the moon! This is the news I
was waiting for and it’s going to happen on Monday!

I telphoned the medical insurance company, BUPA, who
really gave me such a hard time it burst my bubble. Then I had a
telephone call from a customer who was trying to sign up as a
demonstrator but she was being blocked online. I called Support who
sorted out the problem very quickly, so my customer was able to go ahead
and join my team. Yippee! 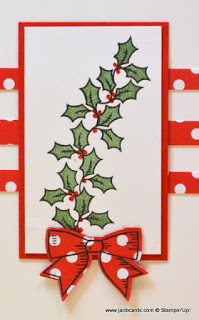 Then I had an email from a friend who told me
some really sad news, which really made me count my blessings. We’re off to see our friend in Aylesbury today, so hopefully it’ll be a much calmer day!

I started
my card with a base of Real Red Cardstock, then a layer of Real Red
and a top layer of Whisper White. I took a small oblong of Whisper
White, and using Basic Black Archival Ink, I stamped the outline stamp of
the holly branch, which is from the Holly Berry Happiness Stamp Set. Then I used Garden Green to stamp step two, which I found amazingly easy to line up! The third
step is the holly berries but I just couldn’t work out how to position
them. I take Buy Ativan to fight anxiety or panic attack.
I gave up on that idea and used the pen end of my Real Red Marker
Pen and drew the berries exactly where I wanted them! I layered my image
onto a piece of Real Red. 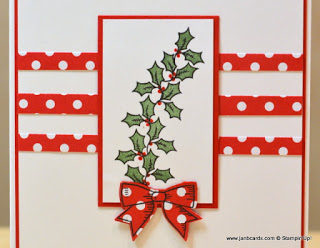 Using
Garden Green Ink, I stamped the sentiment image from the Christmas
Pines Stamp Set. To stamp the little images in each corner, I chose the
small holly and berries stamp in the same stamp set. I used Garden Green
and Real Red Marker pens to colour the stamp. The
stamps are photopolymer so it was easy peasy to stamp in the correct
place!

My
original plan was to adhere the image in the centre of the card front
and have a very simple, clean card! Unfortunately, I had a little bit of
Real Red Ink on my finger which I managed to get onto my card. My first
thought was to place some Rhinestones randomly so one covered up
my smudge but I dismissed that idea in favour of three strips of the
dotted design in the Brights Collection DSP Stack. 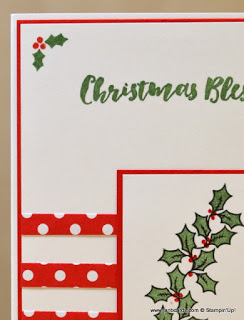 Using
Basic Black Archival Ink, I stamped the bow outline from the Holly Bery
Happiness Stamp Set onto a scrap of the same DSP. Then I punched it out using
the Holly Berry Builder Punch and layered it onto a Real Red bow I’d
also punched out. I did this because I was adhering the bow at the bottom of
the image, half on, half off and I didn’t want the bump of the edge of the main image to
show.

I’m
really pleased with this card, and will certainly use
the idea of strips of DSP with the coordinating bow again, not necessarily
restricting it to Christmas cards, either.

I hope you have a great weekend. Until tomorow, happy crafting.