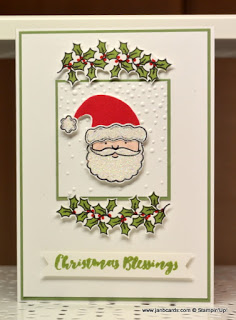 This
morning I posted the video of the card I shared with you yesterday –
Santa & Holly. I had fun yesterday playing with different ways of
creating Santa. Spot the differences?

One of the changes was to the sentiment. After I’d posted my blog
yesterday, I decided that the sentiment looked rather flat and bland,
because the other elements had been attached with Dimensionals.

I
decided I’d keep the same sentiment and in the same colour but to stamp
it onto a strip of Whisper White so I could fishtail both ends and
adhere with Dimensionals. I think it worked a treat! 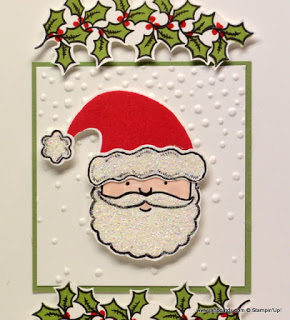 As
I said in yesterday’s blog, I really didn’t like Santa’s ears.
Personally, I think they look too pointed, more elf-like rather than the
happy chappie that Santa Claus is meant to be.

Before I record a video, I always make another sample of the project I’m about
to feature. This largely serves as a reminder of any special I have to
say during the video. On
the card I made prior to today’s video, I cut his ears off and thought
it was a great improvement! I did the same to the Santa I made during
the video but this time, I adhered the fur trim the other way round.

Doing
it this way round, it would almost cover the ears but just not quite!
I’m not totally happy with this Santa either as I think
his face looks squashed! 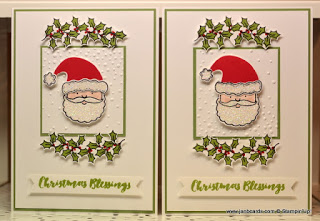 So
which Santa do I like best out of the three of them? I think probably
the last one but next time I make it without bringing the fur trim quite
so far down! Looking
at the pictures in the catalogue it looks as if number three is
correct! Do you have an opinion which you like best, or least?

This
coming weekend I’m going on a crafting retreat in Folkestone – it
starts Sauturday morning and finishes late afternoon on Sunday.

It’s
being organised by my upline Kim Fee and another demo friend, called Caroline
Hallett. Hubby and I are going down to the hotel first thing on Saturday
morning. He’ll actually be working on his laptop while I’m crafting but
he’ll be joining us, along with another six husbands, for dinner together. Once the event has finished, hubby and I will be staying at the hotel for another three nights, just for a break!

As
long as I can get two more videos recorded by end of play on Friday,
I’ll be good to go. I haven’t made cards to post on my blog while I’m
away because I’ll be sharing the projects that have been planned for
us.  Something a little bit different for us all to look forward to!