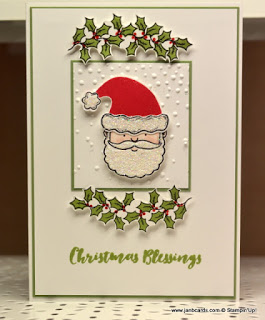 After
sorting out the problem that the hospital didn’t know about my 5 pm
appointment yesterday, everything went well. I had a total of six
injections in my facet joints and have been given my follow up
appointment for 3rd October 2016. My consultant did warn me that I’d
probably feel worse before I felt better. I have to agree, I do feel as
if I’ve been through a small mill, but it’s totally different to
how I feel normally. So far, so good!

I
was still able to make today’s card when I arrived home yesterday
evening. Looking at it this morning, I’ve decided that I’ll make a video
for tomorrow. That means I won’t be sharing this card today anywhere
else apart from here and my team. 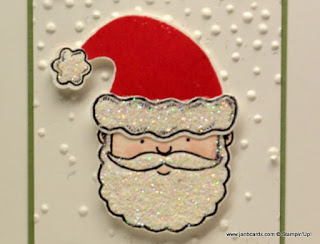 I
have a couple of tips to share. A little while ago someone contacted me
to ask how she could emboss a piece of Whisper White Cardstock using
the Softly Falling Embossing Folder, if the cardstock was bigger than
the embossing folder, without getting a line down the middle.

I knew how
to do it, but decided to do it befdore I responded so I could explain it clearly in
writing. I ended up with a beautifully embossed piece of Whisper White that measured 9″ by 4″, which I put in my box of Whisper White scraps. 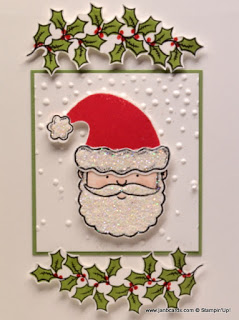 I
saw it yesterday when I was making this card and cut off a piece for Santa’s backing. This means I still have a
large piece leftover for future projects. The tip is, if you need a small
piece of embossed cardstock, why not do a piece larger than you need,
ready for future use?

The
Santa is from the Jolly Friends Stamp Set and I don’t particularly like
his face! I adhered his hat so it covers most of it and I
think it makes him look far more jolly! I’m still not happy about his
ears sticking out, so I’ll be experimenting with cutting them off, and
see what he looks like! It’ll either be not noticeable or his hat will be look too big!

I used  Basic
Black Archival Ink for all all of santa, Real Red Ink for his hat and my
Real Red Marker Pen, the pen end, for the holly berries. I fussy cut
the holly so I could adhere them with Dimensionals. 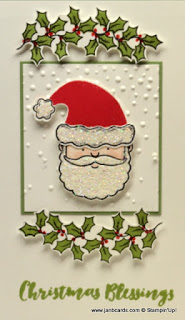 NOTE:
If you don’t like fussy cutting, you could stamp the first sprig of
holly directly onto your top layer, positioning it very close to the
top; then make Santa and his layers and adhere below the holly; stamp
the second sprig of holly, remembering to turn the stamp round, and then
stamp the sentiment at the bottom.

I
chose Tombow to assemble Father Christmas and adhered him using
Dimensionals as well. I have a retired Marker Pen called Blush Blossom
for Santa’s face. Stampin’ Up! brought this pen out of retirement about
three years ago and sold it as a single item. If they ever do that
again, do get one, they are really brilliant.
My
final touch was to add liquid glue to Santa’s beard, moustache, pompom
and fur trim on his hat and sprnkled with Dazzling Details.