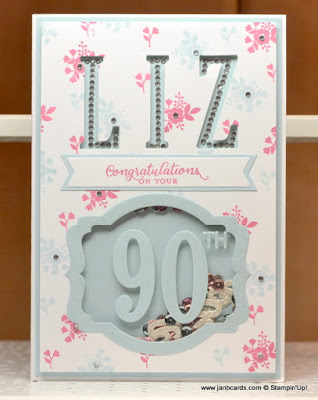 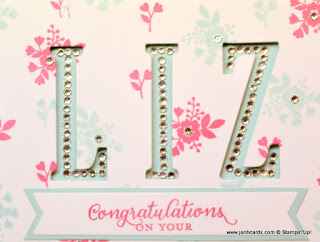 Yesterday was our dear friend Liz’s 90th birthday. Hubby telephoned Liz first thing in the morning so we could both sing Happy Birthday to her. In the afternoon, she had a surprise party that had been organised by her nephew! 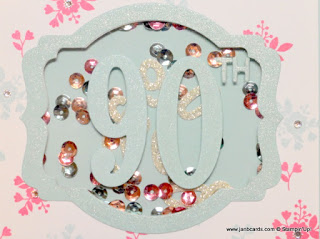 The care home had set aside one of their rooms for the party and when they brought Liz down, they brought the wheelchair in backwards so she didn’t see us all until we all shouted out SURPRISE!!!

This is the very special card I made for a very special lady using Sweet Sugarplum and Soft Sky, which is the same colour combo Natalie used for one of our projects at Team Training on Sunday!

I started with a full A4 sheet of Whisper White Cardstock, scored it at 5.75″, and folded in half, and then I trimmed off the slight overhang. Then I had a layer of Soft Sky and a top layer of Whisper White. 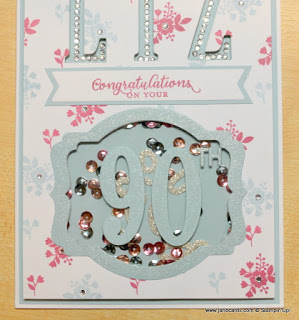 I used the fabulous new Large Letters Framelits Die to die cut LIZ from the uppermost of the top layer and the retired Deco Labels Framelits Dies to cut the window for the shaker at the lower part of the card front.

Using Soft Sky, I also die cut 90 from the Large Numbers Framelits Dies, TH from the retired Little Letters Thinlits Dies, and the frame for the shaker window.

The final die cutting was with the Silver Glimmer Paper and the Little Letters Thinlits dies. I die cut five nines and five zeros so I could put them in the shaker with the sequins. 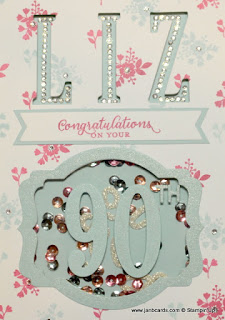 The sentiment, Congratulations On Your, is from the Wild About Flowers Stamp Set and it fitted in so well with 90TH just below it! I stamped it on a strip of Whisper White using Sweet Sugarplum Ink and die cut it using a die from the Cupcake Cutouts Framelits Dies. Then I took a piece of Sky Blue and drew round the outside of the die with a pencil, and then cut it out by hand. This created the layer for the sentiment. 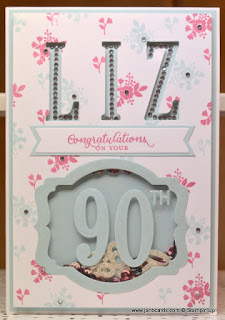 Using Tombow, I adhered the acetate sheet to the reverse of the top layer, as the window for the shaker. Then I used our fabulous Adhesive Foam Strips and put them around the Deco Labels window frame, a little way on the inside, so it wouldn’t be visible from the front window. I added more around the outside edge on all four sides about a quarter of an inch in, again, so it wouldn’t be seen easily. I also put a strip down between the L and the I, and another piece between the I and the Z. This would stop any sagging!  Then I was ready to attach my layers, so I added some Fancy Frost Sequins and the die cut Silver Glimmer 9’s and 0’s.

To attach the Soft Sky layer I removed the backing to  the top strip of the Adhesive Foam Strip. Then I positioned the rest of the layer in place, making sure I kept the uppermost part away, so it didn’t adhere anywhere I didn’t want it to! As soon as I was happy I had the layer in the correct position, I pushed the top end down. Then I peeled off the backing from the rest of the strips. 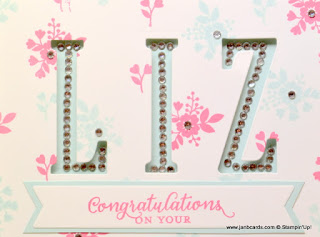 I added some Rhinestones in the centres of all the flower clusters I’d stamped on the top layer, and then painted the 90 and the window frame, using my Clear Wink of Stella Glitter Pen. The finishing touch was adding the strips of Rhinestones on the insides of the letters L, I and Z.

Liz was so thrilled with her card when she opened it yesterday, even more so when I showed her the shaker and the Silver Glimmer 9’s and 0’s inside the shaker with the sequins.