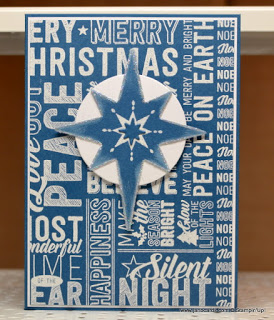 We had a great weekend with our grandchildren, Jack and Molly but it was over far too soon! The four of us went up to visit our friend Liz. When we walked into her room the small helium balloons were still flying high but our large number helium balloons were looking very sorry for themselves.

Liz said she’d never seen balloons as big as these two, and I had to agree, I was surprised at the size when hubby brought them home! 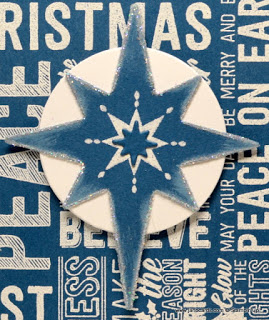 When it was Liz’s 90th birthday party last Monday, we weren’t able to give her the birthday presents we had for her, because she was surrounded by her friends and family, all giving her presents, cards and flowers.

On the day, we decided to bring ours back home with us and to give them to her when we visited yesterday. This turned out to be an excellent idea – another little party!

To make today’s card, I used the Merry Medley Background Stamp I’d won in last week’s Team Training raffle. I started with a card base of Dapper Denim, with a layer of Whisper White Cardstock and a top layer of Dapper Denim. 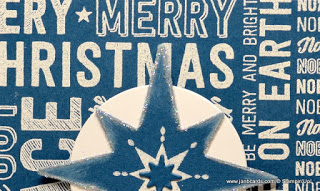 I wiped over the top layer with my Embossing Buddy and then inked the stamp with Versamark. I had the stamp laying on the block, face up, on a piece of scrap paper, so I carefully laid my top layer onto the inked stamp.

I folded the scrap sheet over the top layer and very carefully rubbed over the top layer making sure it had a great impression of Versamark. I removed the paper and the stamp and sprinkled it with White Embossing powder which I then heat embossed. 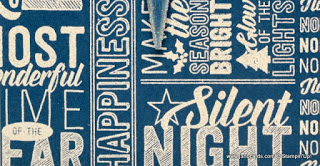 I took another piece of Dapper Denim and wiped it with my Embossing Buddy. I chose the smaller of the two solid stars in the Star of Light Stamp Set and heat embossed it with White Embossing Powder.

I used the Starlight Thinlits I die cut it out using the large plain star die and positioned it so the white embossed star was right in the centre. 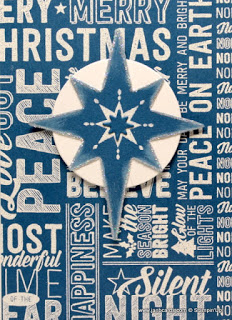 I sponged the edges of the die cut star using a Dauber and some Whisper White Craft Ink. Then I painted some wet glue, like our Fine Tip Glue Pen,  all around the edge of the star and dipped it in the Dazzling Diamonds Glitter.

I took a scrap of Dapper Denim Cardstock and die cut the smallest star, then I adhered it in the centre of the solid embossed star.

When I laid the star on the card front, it almost disappeared so I tried to make a white layer it by drawing around the outside on the die I’d used to cut the star out.

The theory was good but I didn’t like the star I’d finished up with! 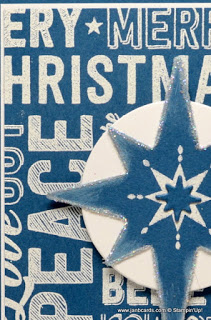 So I thought about putting the star in an oval of Whisper White Cardstock. Unfortunately, our largest oval wasn’t big enough so I thought a circle that was much smaller than the star would look like a moon behind the star. This idea worked a treat!

I adhered the star to it using Tombow and then used Dimensionals to attach the circle and star to the card front.