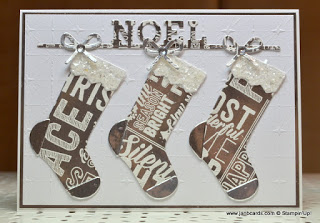 After I’d posted yesterday card I thought I really ought to make a video because I can’t assume everyone already knows how to use Mica Flakes.

Also, I wouldn’t be surprised if customers said they hadn’t noticed them in the catalogue because their photograph is very discreet and very easy to overlook.

It’s such a shame because this is a fabulous product.

I had to do two takes for today’s video which, fortunately, doesn’t happen often.

I’m always having to do restarts but a retake to me is where I complete one video, and something happens right at the end, which means I have to start from scratch again!

This was even more frustrating because I’d had a problem when I was heat embossing in the first take when my Foil bubbled! I decided to leave it in so we could learn together whether it was usable or not – it was!

I’ll tell you what happened! 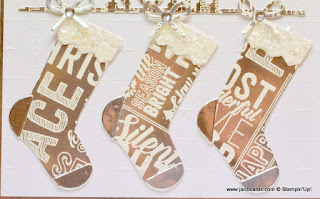 When I was about to start the heat embossing, I explained about having to be careful with this technique on Foil because it’s easy to cause bubbling.

Yes, I caused bubbling, and as I already had three stockings ready, I decided to leave it in. 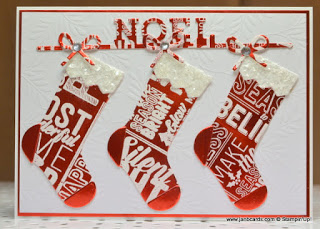 When it was time to die cut the stocking, I placed the die right over the section that had bubbled because I wanted to see if it would make the paper separate or not and no it didn’t!

The only slight problem was that the foil had buckled a bit but it laid down totally flat after it had been placed under a weight for a short time!

I’m sorry I haven’t been able to share that with you on video,  but at least we now know, if foil bubbles, it can still be used!