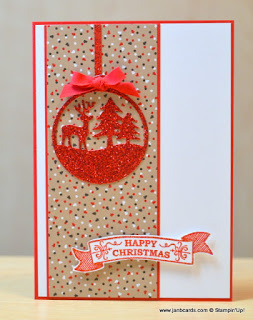 When we were able to pre-order from the Christmas catalogue, I
bought quite a few of the new products.

I decided on the Merry Tags
Framelits partly because I wanted to see exactly what the individual cut outs look like.

When I first
started buying this type of dies, I used to line both sides of one of
our DVD boxes, with magnetic sheets so most boxes would hold two sets of dies. 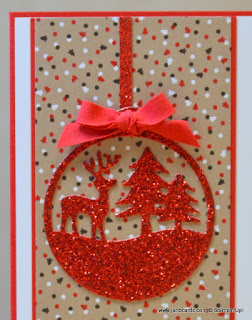 Then I’d die cut all the shapes of that set and adhere the die
cuts onto white paper, which I then slipped into the outer cover.

After a while
I decided this method of storage was  taking up too much room!

I changed over to putting
magnet sheets inside the wallets the dies arrive in but I do miss not
having samples of the die cuts visible anywhere.

Yesterday, I thought of a way I could remedy this and decided to
experiment with the wallet storage.

I took out the explanatory notes
that are in the wallet when they arrive – these will be filed together
somewhere safe – and adhered the cut outs to the back of the magnetic
sheet.

Now I can look at one side or the other of the wallet and see either the dies or the
cut outs – see last two photographs. 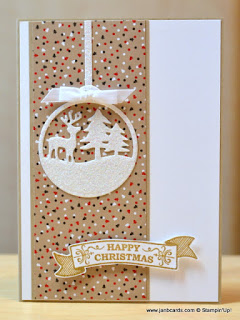 I’m hoping to do this to all
sets of dies, as and when I use them!

Time will tell if this is a good
idea or not………the theory is good! LOL!

For yesterday’s card, I had a rough
idea in my mind what the design was going to be like and chose which bauble I wanted to use.

Then I went through the Candy Cane Lane Designer Series Paper (DSP) and chose which design I wanted to use.

At first, I
was unsure whether to use Real Red or Crumb Cake as the background
colour. 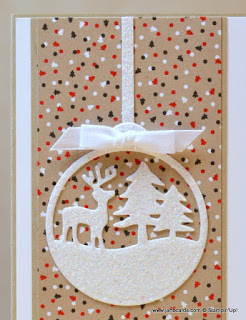 I settled on Real Red as we have Red Glimmer Paper and that was an
important part of my design.

As
I was working on my card, I kept thinking what would this design look
like in Crumb Cake.

I decided there was only one way to find out and
that was to make one, so I made up my mind that I’d make one after I’d finished the Real Red card – as you can see, that’s exactly what I did.

I
started my first card with a base of  Real Red Cardstock, with a layer
of Whisper White.

I adhered them to the card front,
off to the left hand side. 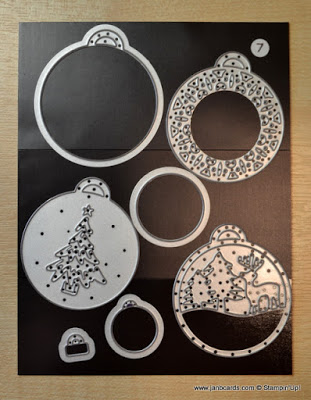 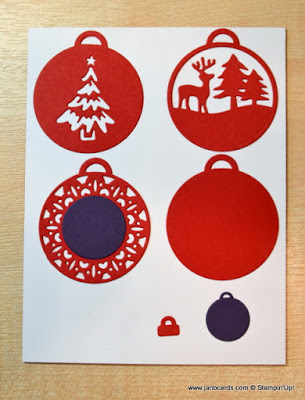 I die cut the bauble from the Red Glimmer
Paper and took a thin strip of the same paper from my wallet of scraps. I
adhered the strip as if it were a cord attached to the bauble and glued
both pieces, using Tombow, to the DSP strip.
The
sentiment is from the Seasonal Bells Stamp Set and I stamped it onto a piece of Whisper
White using Real Red Ink. Then dipped it into Iridescent Ice
immeditely, and heat set. It
wasn’t until I started writing today’s blog, I realised this product
had retired – had I remembered, I would have used Clear Embossing Powder, sorry about that!! I cut the banner
out by hand and attached to the card front with Dimensionals.
I tied a
small Real Red bow using some retired Stampin’ Up! ribbon and attached it
to the bauble using a Glue Dot. Then I decided to make the same card
again but changing the Real Red Cardstock to Crumb Cake.
I’m really
pleased with how both these cards turned out and just for once, I don’t
have a favourite! That’s about it for today. Until tomorrow, happy crafting.