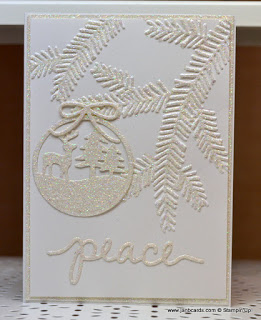 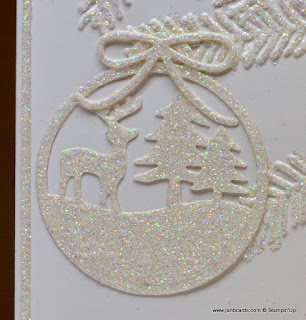 For today’s card, I decided I wanted to use the Pine Bough Embossing Folder but I didn’t have any other ideas. I started with my top layer of Whisper White Cardstock, dry embossed.

I decided I’d try colouring it and chose to use my Clear Wink of Stella Glitter Pen first. The first one was on Whisper White Cardstock and the second one was on Shimmery White Cardstock. See photograph number 7.

(Note: I apologise for the poor colour of the photographs – the problem lies with me not the camera! LOL!)

This gave a lovely result, so I embossed another
top layer and used the Gold Wink of Stella Glitter Pen. This looked more like yellow and also quite child-like painting.

Then I thought I’d try my Old Olive Marker Pen, the result looked even more child-like! See photograph number 8 for the Gold Wink of Stella and the Old Olive. 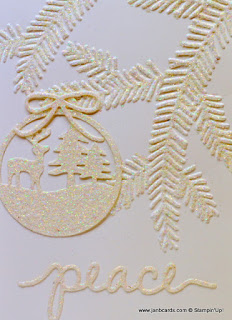 For the final and most successful attempt, I painted over all the raised pine needles with a retired Two-Way Glue Pen and very quickly dunked it into my box of Dazzling Diamonds Glitter.

The result was stunning! Now I knew how I was going to build my card.

I started with a card base of Whisper White Cardstock and then a layer of Dazzling Diamonds Glimmer Paper, and my top layer. 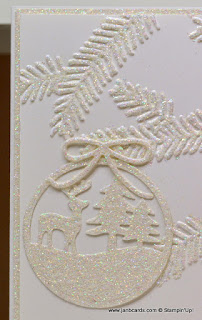 Then I adhered the bauble, bow and word to the card front and my card was completed.

Once I’d decided on the design of this card, it was quite a quick and easy card to make! 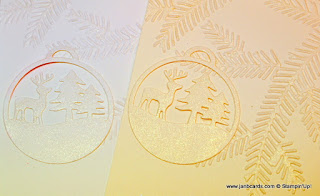 Another project I was working on today was the projects I’d be doing for my lessons that I’m starting again on Saturday, 1st October and Sunday 2nd October.

One of the changes I’m making to my classes since I had this break over the summer holidays, is that I won’t be doing two lessons a day. I’ve decided to be kinder to my back and spread the lessons over two days! 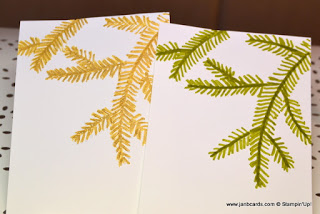 I’ve also decided that I’m going to concentrate on one stamp set each month. Today I’ve designed two cards I’m very happy with but I’m not sure about the third project. I still have just over a week to think about it, so no worries just yet.

We have our grandchildren, Jack and Molly, staying with us for the weekend because Vicki’s taking part in the Three Peaks Challenge, with a group of friends.

Since she was poorly three weeks ago, she’s been following a very strict get fit programme, so she’d still be allowed to take part.

The National Three Peaks Challenge is an annual event in which participants attempt to climb the highest mountain in Scotland (Ben Nevis), in England (Scafell Pike) and in Wales (Snowden) within 24 hours.

It’ll be a great experience for her but I’ll be glad when she’s back home!