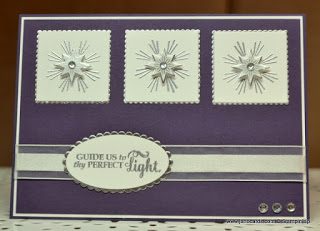 The Star of Light really is a super stamp set. It’s actually a two-step stamping set but I haven’t played with that part of it yet! I was interested to see how the shards of light looked on the two smaller card and tested them on a scrap of paper first. I thought they both looked absolutely fabulous and settled for the larger one for today’s card – no reason for choosing that one rather than the other! 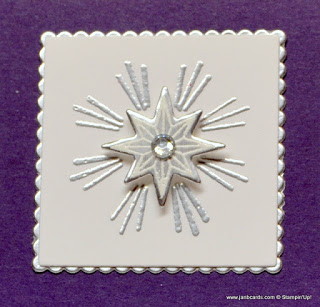 To create my square star images, I took the Layering Square Framelits Die that I’d be using to die cut the image, and drew round the outside edge and created three separate squares. This gave me a guideline as to where I needed to stamp my images and have enough room to be able to die cut them!

Using Smokey Slate Ink stamped off once, I stamped the first star in the centre of the first pencil square! I repeated this in the next two pencil squares. Next, I wiped my Embossing Buddy over the three squares and inked the shards of light stamp using Versamark Ink. 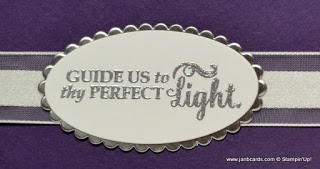 I lined the stamp up over the stamped stars so the shafts of light were in the right position. As these are photopolymer stamps, this was amazingly easy to do. I turned the image round 90° and repeated the process. I did the same to the other two squares and sprinkled Silver Embossing Powder over all three images and heat set it.

I used a straight cut die from the Layering Square Framelits Dies to cut out the images. Then I took some Silver Foil and die cut three of the corresponding scalloped squares for layering the images. I adhered the two layers together using Tombow. 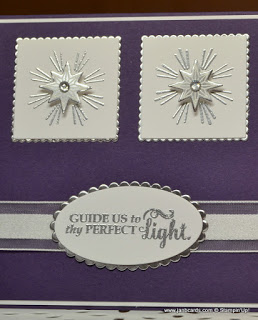 I took a small piece of Silver Foil and wiped over it with my Embossing Buddy. I inked up the larger of the two small stars in Versamark and very carefully stamped down onto the Silver Foil. You must be extremely careful doing this as the stamp will be very slippery and it’s very easy to allow your stamp to slide on the shiny surface! Yes, I’ve been there! LOL!

As soon as I had stamped three stars, I sprinkled them with White Embossing Powder and heat set it. I used my Big Shot with the Magnetic Platform to die cut the stars using the Starlight Thinlits Dies. I adhered these to the stamped images on my squares with some Dimensionals I’d trimmed down so they would fit under the star but not be visible. 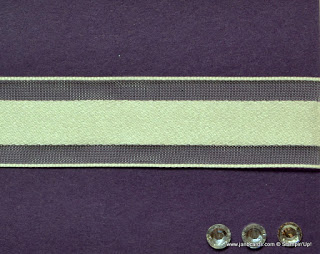 I chose the sentiment from the same stamp set and used the same routine that I used for the shafts of light. I used the Oval Layering Framelits Dies for the sentiment, straight cut, and scalloped for the the Silver Foil layer. 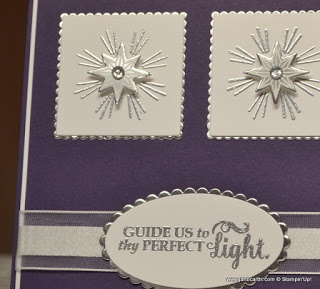 I wrapped a piece of our 5/8″ Whisper White Ribbon Organza around the front of the bottom half of the body and adhered it at the back with SNAIL. I adhered the three images and the sentiment to the card front using Tombow. When I did the sentiment, I held it down for a few seconds to allow the glue time to get a hold, as part of it was over the ribbon. For the final touch, I added Rhinestones to the centre of the star and a line of three along the bottom on the right-hand side.