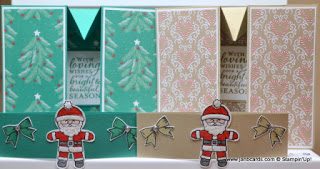 I first saw today’s box card made about five year’s ago.

It was posted by Valita’s Fresh Folds on 9th. November 2010 and I saw it sometime soon after. 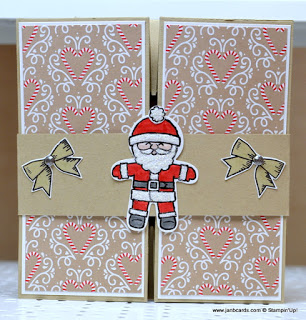 I fell in love with it and saved the video in my playlists, with every intention of making it sometime! I saw the video again the other day, and decided now was the time. It was so easy, I decided to make a video, too! I hope you like this as much as I do!

During her video, Valita said she made some small gift tags to pop inside the box as a little gift for the recipient and I thought what a really lovely idea! 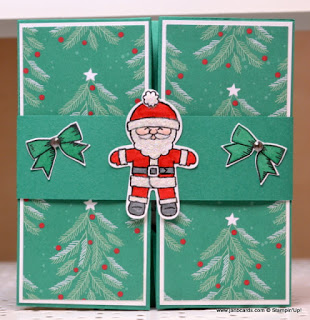 Alternative ideas are to pop a gift card inside, or money, some family photographs or a Christmas newsletter, the list is endless.

It took me three attempts before I was able to iron out the initial problems I’d encountered but once accomplished, I was really pleased with the end result.

The possibilities for decorating the box card, inside and out – are also endless. When making a video, I try to keep the decorating to a minimum so it doesn’t take up so much time that it becomes boring.

There are several options for where a message can be written in the card. 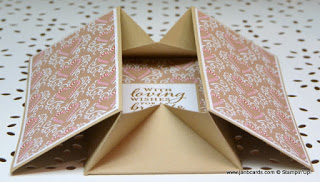 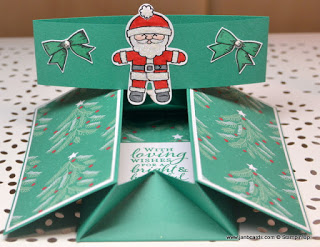 The first option is to adhere a fancy shape die cut in Whisper White or Very Vanilla to the back of the box, which has been decorated in the same way as the two side panels and the inside layer.

There’s also plenty of room for a hand-written message behind the decorated side panel. Valita suggested you could write on the back of the inside panel, as long as you didn’t adhere it down!

My first thoughts about how to keep the box closed were to have an image that would act as an anchor for a sentiment on the front, but I decided that there wouldn’t be enough holding power.

Then I thought about tying a ribbon around, after anchoring it down behind the back layer, but it allowed the top and bottom of both flaps immediately above and below the ribbon, raise up more or less straight away, a bit like a muffin top!  I decided on a belly band as it’s quite wide and does a good job of holding a lot of the card in……rather like a corset!!