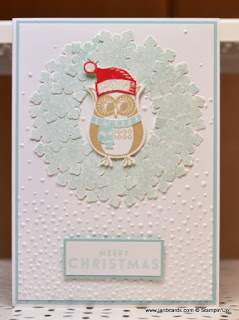 I’ve also used Flurry of Wishes which has been brought forward from last year’s stamp sets.

Although there is a Santa hat in the Cosy Critters, I’ve used the hat from another of last year’s brought forward stamp sets, Snow Place, because it’s smaller.

The idea for this card came when I was working yesterday, on a card I’m planning for next Wednesday’s video. 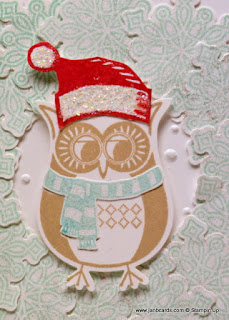 As it’s a mechanical card, I used a retired colour Lost Lagoon so if it went wrong, I wouldn’t have lost too much.

As it happened, it was very successful, so I carried on and decorated it!

I had a look through the Lost Lagoon stamped/punched images wallet to see what I could use.

I found three houses and was able to add the same sentiment that I used yesterday “from out home to yours”. I also found some stamped, punched snowflakes. 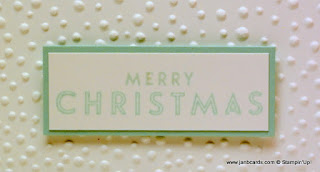 I dry embossed the top layer using the Softly Falling Embossing Folder and adhered the two layers and card base together using Tombow. 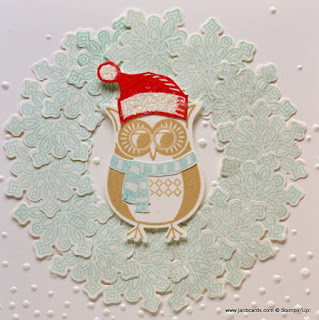 Using Pool Party Ink and Whisper White CS, I stamped fourteen of the small snowflakes from the Flurry Of Wishes Stamp set and punched them out using the Snow Flurry Punch.

I punched a 1.5″ circle from a scrap of paper and adhered it with removable glue to where I wanted the centre of my wreath to be.

I put a small amount of glue on the right-hand side of the first snowflake and positioned it so two points of the snowflake were against the outside edge of the circle.

Then I adhered the snowflakes around the circle trying to leave the same gap between each of them. 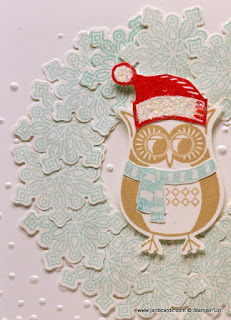 I did a dry run before I started, so I knew approximately how much the gap should be.

When I reached the last snowflake, I was able to lift
the first one and slip the last one underneath.

To create the Owl, I stamped the image once using Crumb Cake Ink and punched it out using the Owl Builder Punch.

Then, after cleaning the stamp, I stamped another image using Pool Party Ink so I could fussy cut the scarf.

I painted the scarf with my Wink of Stella Glitter Pen and adhered it to the owl. 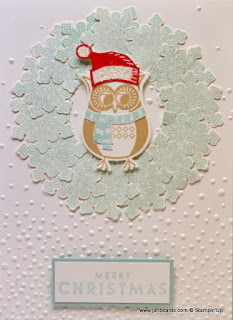 I attached the image using Dimensionals so the owl was sitting on the bottom part of the inside of the wreath.

I stamped the Santa hat on another scrap of Whisper White CS and fussy cut it out.

I didn’t use the die as I didn’t want the white outside all around the edge.

I painted the fur cuff and pompom on the hat with wet glue and then covered it with Dazzling Diamonds.

Using Tombow, I attached the hat to the owl and supported the pompom with a Dimensional. 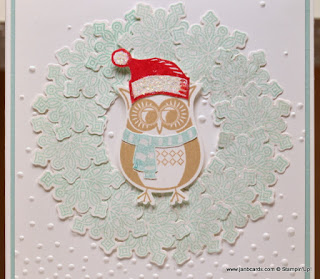 I adhered it to the front of the card using Dimensionals.

The final step was to paint all the snowflakes with Wink of Stella Clear Glitter Pen.

Tomorrow, I shall be at the Gingham Goose Craft Market at Hayes Village Hall, Hayes Street, Hayes, Bromley, BR2 7LE.

If you’re in the area, do pop in to say hello – it’ll be lovely to see you!