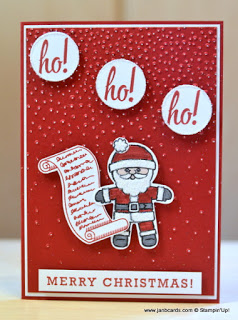 Yesterday we went to see our dear friend Liz in Aylesbury yesterday morning. As we were signing into the nursing home, the fire alarm went off about four feet above my head! All the internal doors automatically closed themselves, all the staff appeared in the hallway and started checking all the rooms one by one. Once they had identified which room had triggered the fire alarm – falsely – the staff went back to what they were doing. I was 110% impressed with how well the staff reacted to the fire alarm, there was no panic, they very calmly and very efficiently set about finding out what had caused it. They were absolutely brilliant! 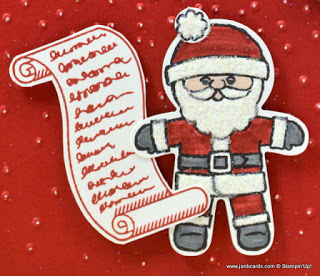 To create today’s card, I’ve used a stamp set that I haven’t used before – it’s the Brushwork Alphabet. Although there is a stamp in the Greetings from Santa Stamp Set that says Ho! Ho! Ho!, I wanted to have three separate images. 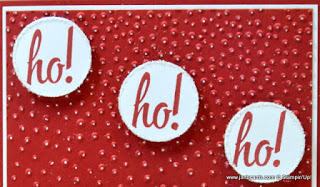 I started my card with a base of Cherry Cobbler, Cardstock (CS) with a layer of Whisper White CS and a top layer of Cherry Cobbler CS. I dry embossed the top layer using the Softly Falling Embossing Folder and then went over all the “bumps” of snow with my white gel pen making a small white dot. Then I adhered the two layers to the card base using Tombow. 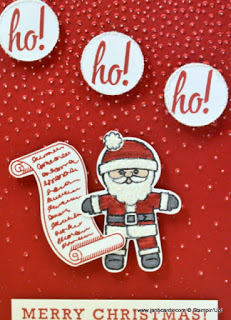 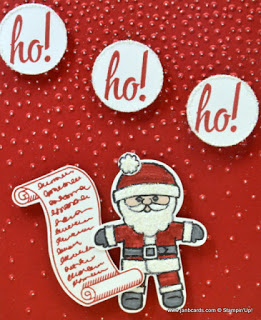 Using the Basic Black Archival ink and some Whisper White CS, I stamped the Santa image from the Cookie Cutter Christmas Stamp Set. I also stamped one pompom for Santa’s hat. I punched both images out using the Cookie Cutter Builder Punch. To colour Santa, I used Cherry Cobbler and Basic Grey Marker Pens as well as my retired Blush Blossom Marker Pen for his face. I adhered the pompom to the hat and then added some wet glue to the pompom, the fur around the hat, sleeves, jacket and trouser cuffs and quickly dipped Santa into my box of Dazzling Diamonds Glitter.

Using Cherry Cobbler Ink and some Whisper White CS, I stamped the Christmas wishlist stamp from the Greetings from Santa Stamp Set and cut it out freehand leaving a small gap of white all around the edge.

Still with the Cherry Cobbler Ink and Whisper White CS, I stamped three Ho! Ho! Ho!’s. The first one I stamped was a tad too big for me to punch out with the 1″ circle punch, so I tried again, getting the three letters closer together. This fitted much better, but the top of the exclamation mark, and the bottom of the h, were just about on the punched edge.  For my third attempt, I stamped the h first, then inked up the o, and because it’s a photopolymer set of stamps, I was able to look through the actual stamp so I could line it up so it joined onto the h perfectly! Likewise, I was able to line the exclamation mark up and leave an absolute tad of a gap with the o! This punched out brilliantly, leaving a visible gap between the edge of the letter and the edge of the circle. I put wet glue all around the edge of the circle and dipped each one into my box of Dazzling Diamonds Glitter. 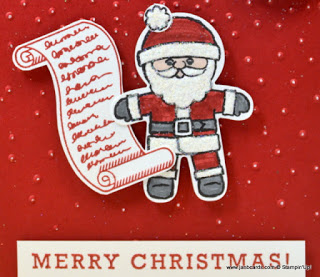 Finally I took a strip of Whisper White CS and stamped the MERRY CHRISTMAS sentiment from the Greetings from Santa Stamp Set, in Cherry Cobbler. I adhered all the images and sentiment to the card base using Dimensionals. I also added one Glue Dot on the wishlist where it lays onto Santa’s leg.