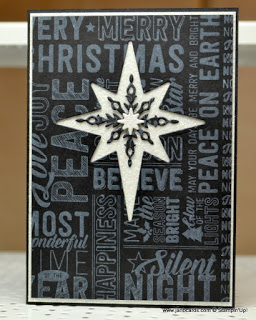 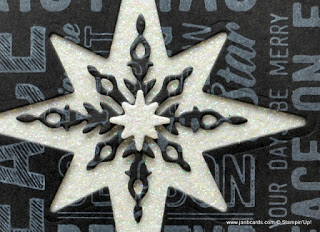 What a saga I’ve had with UPS!

I contacted UPS Customer Services and was told the driver couldn’t find my address! What a load of baloney? In this day and age of SatNav that obviously was not the truth!

I was told my parcel would be delivered on Friday – it was delivered yesterday by my regular driver who had just returned from his holiday.

There was a sticker on the back of the parcel which read “Misload”! See the last photograph!

Obviously, the truth was that my parcel had been loaded onto the wrong lorry on Tuesday, was in the warehouse on Wednesday being correctly sorted ready for delivery on Thursday!

Why didn’t they tell me a mistake had been made? Mistakes do happen, even with normally great companies like UPS!

My greatest critic, hubby, doesn’t like today’s card because he doesn’t like black cards! Yesterday, I decided to make a card with an image stamped in our White Craft Ink on Basic Black Cardstock (CS). I’d seen a post on Facebook of a test carried out on ten white inks, and Stampin’ Up! Craft Whisper White Ink came out best!

I’m not sure I have ever used this ink for stamping, although I have used it plenty of times for sponging edges. 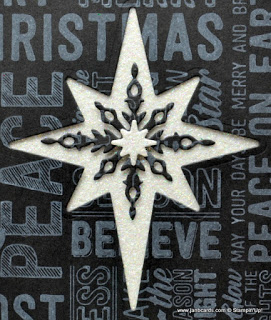 I used the Merry Medley Background Stamp using Whisper White Craft Ink on Basic Black CS. I’m really pleased with how it turned out and wonder what it would look like on Cherry Cobbler or Garden Green CS!

To
make today’s card I started with a base of Basic Black CS, then a Layer
of Dazzling Diamonds Glimmer Paper, and my stamped Merry Medley image for the
top.

I
used the large plain star in the Starlight Thinlits Dies and die cut a
star out of the uppermost part of the image in the centre of the sheet. 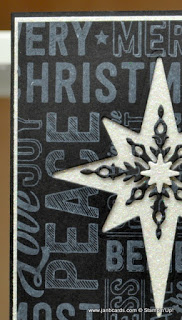 Then I took the smallest star outline die, and die cut using  a
scrap of the Dazzling  Diamonds Paper. 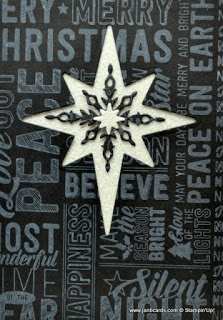 I
adhered the image layer to the Glimmer Paper using Glue Dots. To adhere
the black star, I rolled a few Glue Dots into small dots and put them on the
back of the larger areas of cardstock and I also put some Tombow at the
end of all eight points.

I put this under a weight for a few minutes
while I carried on with something else. Then I came back to it and added
the small Dazzling Diamonds Glimmer Paper star using a Glue Dot.

I thought about adding a separate sentiment but decided against it! 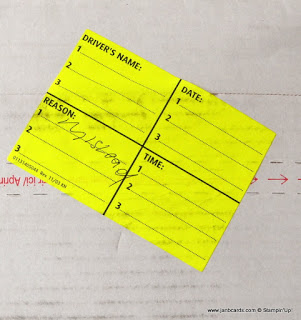 That’s about it for today, Unti tomorrow, Happy crafting.