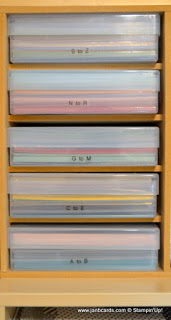 As I said yesterday, I didn’t think our burst water problem would be sorted out by the end of the day, but I didn’t expect to be told that it wouldn’t be sorted out until next Tuesday! Yes, 1st. November 2016! Apparently, although the burst pipe is just inside the house, as this is the third time we’ve had this problem in the last five years, Dynorod have decided they need to do work to the pipes just outside the house. This work requires specialist equipment which they won’t have available until next week! Surely this is a very clear indication to Dynorod that they need MORE equipment?

It’s frustrating having our mains water turned off most of the time, apart from the basics, but it does make me count my blessings. My thoughts and prayers go out to the millions of people in the world who don’t enjoy the luxury of clean, running water. I only have five days to wait!

I spent my time in my studio yesterday working on my swaps for Telford. I’ve completed thirty-six of them – ideally, that leaves me 84 to make, but I can’t see me doing that many in the time I have left. I have just seven days! OnStage Local is on Saturday, 5th November, and we’re travelling up on Thursday to make a weekend of it. I’ll be making a video showing what my swaps are and how I made them, which I’ll post on Sunday, 6th November, 2016.

These three storage units are from a company called Storage4Crafts, which is where I’ve bought most of my units from. Although it was initially a UK company, they are also in Canada. 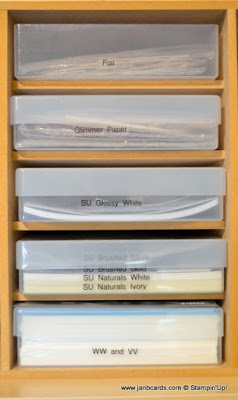 Photograph 1 – S -Z; N- R; G – M; C – E; A – B. When I said on my blog on Tuesday, that I top up each individual cardstock colour wallet to ten sheets, these are the boxes I go to. Each colour has it’s own cropped plastic folder inside the box so I know when I run out of a colour. I cut the folders to make them shorter, so they fit into the boxes easily. I keep all my colours in alphabetical order, which is the same as my suspension/ hanging files. It doesn’t take long to check the folders and it also means I don’t miss any colours. I have a Brother labelling machine for the labels on the boxes, using Clear Tape with Black. 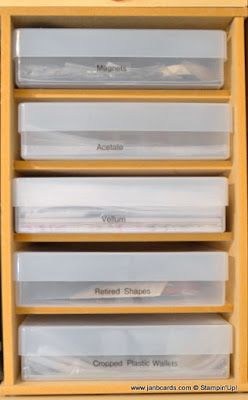 Photograph 2 – Foil; Glimmer Paper; SU Glossy White (retired) SU Naturals White & Ivory, Brushed Gold & Brushed Silver (retired); WW and VV. The top two boxes hold all my off cuts for my Foil and Glimmer in their own plastic wallets. Each wallet also has a Ziploc bag which holds punched and/or die cuts made but not used. I don’t file these with the full sheets and I’ll explain when I show you the storage for those. The third and fourth boxes hold retired card stock that is too good to de-stash and gets used for my personal projects. The last box holds my full sheets of Whisper White and Very Vanilla Cardstock. The blue you can see at the top of the box is the plastic folder I keep the opened pack of Very Vanilla.

Photograph 3 – Magnets (non-SU); Acetate (non-SU);  Vellum; Retired Shapes; Cropped Plastic Wallets. The top box is where I store my magnetic A4 sheets, which I use for storing my framelits in their SU pouches. I also keep all the off cuts so I can use them for small box closures, magnetic book markers, etc. In the third box, at the bottom, is my non-SU vellum. On top of this, I keep SU full sheets of Vellum in a cropped folder and off cuts in a wallet. In the fourth box, I put and Stamped/punched/die cuts that have been made using a retired product. This may be a particular colour of cardstock, or something punched with a now retired punch. When the box is full, I pass the contents onto someone who has children. The last box is for the cropped folders and wallets that aren’t needed at present. I had quite a build up of these because I was getting quite a backlog of retired Designed Series Paper which I have now nearly cleared.

These three units sit on top of my bigger units with a long plank of wood that goes across all of them, giving me lots of extra storage space, above and below. More to follow this week.

I hope you’re enjoying this quick trip around my studio. Until tomorrow, happy crafting.