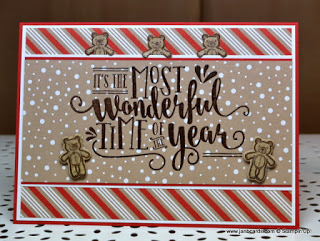 This morning I posted the video which shows how I made my friend Liz’s 90th birthday card which I shared here with you on Tuesday, 20th. September 2016.

I altered the card I made in the video so it’s suitable for my Mum’s 93rd birtday on 3rd December 2016.  – she’ll be 93! I changed colour combo – this time I used Wisteria Wonder and Mint Macaroon. It’s a long video because there are several big elements to it. I suggest you keep your finger on the Fast Forward button so you can give it a good workout!!

For
today’s card, I started with a base of Real Red Cardstock (CS), followed
by a layer of Whisper White and a top layer of a stripe design from the
Candy Cane Lane Designer Series Paper (DSP).

For
the thinner strip actoss the centre, I started with a layer of Whisper
White CS, then a layer of Real Red and a top layer of the spotty Crumb
Cake from the same set of DSP. 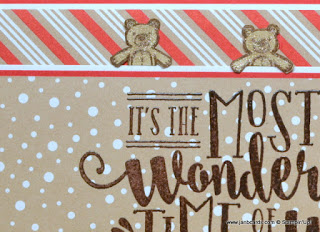 I
chose the sentiment from the Wonderful Year Stamp Set  and heat
embossed it on top of the DSP using Versamark and Early Espresso Ink.

I
wasn’t sure if that would work without scorching the DSP but it worked
beautifully; I just needed some teddy bears to finish off my card.

I took the small teddy bear stamp fom the Santa’s Sleigh Stamp Set and stamped five of them.

I die cut them all using the coordinatimg die from the Santa’s Sleigh Framelits.

I
cut the legs off three of them so I could adhere them peering over the
top, and I adhered two more bears – full size  – standing either side of
the centiment.

I
painted over all the bears, using my Wink of Stella Clear Gliter Pen. A
much easier card to make than today’s vide card. Until tommorrow, Happy
crafting. JanB.