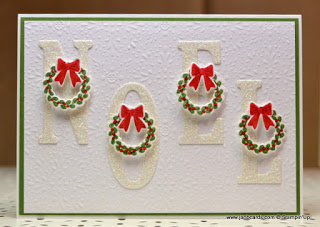 Today’s video is a little bit different from normal for two reasons.

At the end of the video, I show four other cards I’ve made using the same layout as the video card.

I’ve included photographs of each card and includes the design I shared here on Monday. 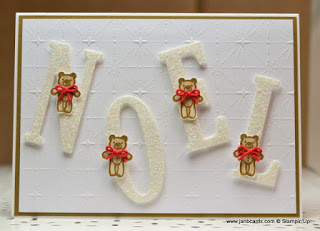 During the video, I also showed how to die cut a negative panel that I’ll be using in next week’s video – probably next Wednesday. That’s surprisingly well organised for me! LOL!

Photograph 1 and video – wreath. The stamp is from Santa’s Sleigh and has a set of coordinating dies, by the same name,

The wreath and the bow are both outline dies so I coloured mine.

There are four main, different ways you can position the letters.

I have shown three options with my cards here. 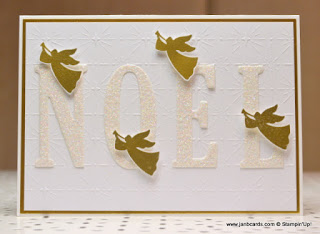 The second photograph shows teddy bears which are also in the Satna’s Sleigh Stamp set, with a coordinating die.

I stamped the teddies onto Crumb Cake cardstock using Soft Suede ink and then die cut them. 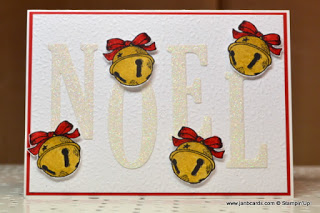 I also used Soft Suede Cardstock as the layer between the card base and card base.

The third photograph shows the angel from the Joyful Nativity Stamp Set which has been heat enbossed in gold and then fussy cut.

The fourth photograph shows the bell from the Christmas Magic Stamp Set and is the card I shared here on Monday. 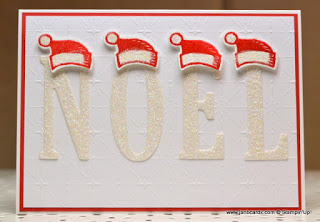 Although this isn’t my favourite card in this design, I’m really pleased that I’ve found a fantastic use for our Gold Wink of Stella Glitter Pen.

It paints the bell a beautiful glittery gold colour. I painted the bow in Real Red Ink and then went over it with the Clear Wink of Stella Glitter Pen.

Although it’s difficult to see the glitter, except in real life, the bells really show the true beauty of Wink of Stell Glitter Pens.

The last card is the Santa hats from the Snow Place Stamp Set and die cut using the hat die from Snow Friends Framelits Dies. I inked the stamps in Versamark, then in Real Red Ink. As soon as I stamped the images, I sprinkled them with Clear Embossing Powder and then heat set them!