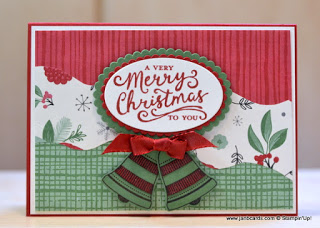 Yesterday, I received a delivery of clothes I’d bought online!

I took them out of their bags, put them on hangers and hung them around the bedroom, wherever I could!

There was one blouse that struck me immediately as a great idea for a card. 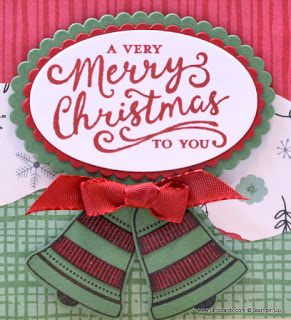 It was three colours and had wavy lines joining each section, hence the design on today’s card!

I started with a card base of Cherry Cobbler Cardstock (CS), then a layer of Very Vanilla CS and a top layer of Whisper White which was the result of an experiment that didn’t quite work out.

As I was planning to cover the whole sheet, this wasn’t a problem!

I adhered the Very Vanilla CS layer to the card base, using Tombow. 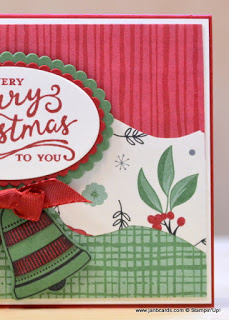 I took three strips of patterned paper from the This Christms Specialty Designer Series Paper (DSP).

The top and bottom designs covered  half of the top layer each, meeting in the centre.

This didn’t need to be too precise as it was going to be covered up with the third strip, so I adhered them onto the top layer using Tombow. 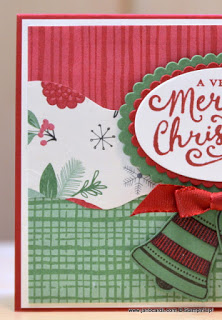 The third strip was about 1.5″ longer than it needed to be because I was planning on adhering it at an angle.

I took a pair of scissors and cut a line of gentle curves, of different sizes.

Then I turned the paper round and did the same on the opposite side!

I adhered this at an angle on top of the top and bottom designs.

Using Cherry Cobbler Ink and Very Vanilla CS, I stamped the sentiment from the Reason for the Season Stamp Set.

I die cut it using a straight cut oval from the Layering Ovals Framelits dies, then I used two different sized scalloped ovals from the same set and die cut one in Cherry Cobbler and one in Garden Green.

I adhered all three together using Tombow.

I punched the two green bells out using the Bell Punch and hand cut the four black striped bands on the red bells.

I adhered these to the green bells using Tombow. 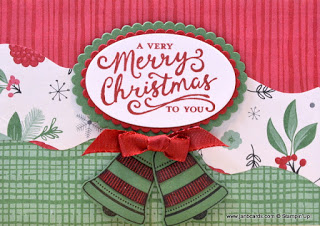 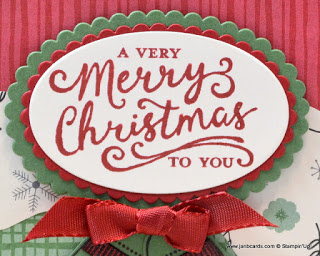 I painted over the four red stripes using my Clear Wink of Stella Glitter Pen.

I adhered the bells to the card front using Dimensionals and then did the same to the sentiment.

I added a small bow I’d made using the Cherry Cobbler Ribbon that comes in the Combo Pack, with Garden Green, on page 20 of the Christmas catalogue.