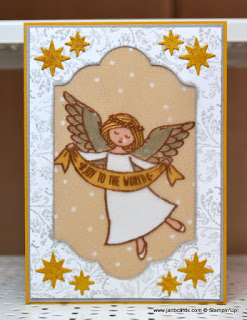 This morning I uploaded my video showing how I made my Vellum Angel card and how I managed to get her dress just so, so white without painting!

When I shared my card with you here on Tuesday, I explained I’d used a Blender Pen and White Craft Ink – not a recommended practice – but once I started preparing for the video I realised that the dress didn’t need to be painted at all!

I spent a lot longer playing with this card than I normally do when I’m preparing a project for a video.

Hence the reason why I was able to share another vellum angel card with you yesterday that I had heat embossed using silver. Yesterday’s angel card was the one with the doily cloud!

The card I demonstrated in the video is the same as the card I shared here originally except I omitted the Smokey Slate frame. 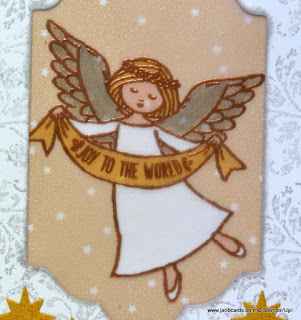 While I was playing, I decided to see what the card would look like without the frame and I really liked how it seemed to open up the card, although I still felt it needed some kind of frame.

I decided to sponge the inside of the die cut frame and the outside of the Whisper White layer. 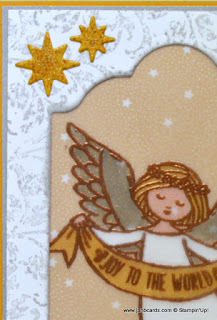 When I put the card together, I wasn’t happy with the way the sponged outside edge seemed to just disappear in the Wink of Stella Glitter edge  on the Smokey Grey layer.

This is when I did another layer but this time I just sponged the inside of the die cut frame.

I have one more vellum angel that is a reject at the moment.

The reason why it’s a reject is that I put SNAIL on the vellum first, instead of putting it on the Whisper White layer first. 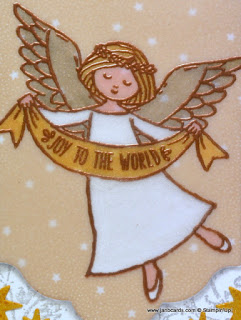 The result was that the SNAIL was visible on the front of the card. At the moment I haven’t decided what to do with this image.

As the saying goes, watch this space!

In preparation for the videos, I pre-cut three large and three small stars so I only needed to die cut one of each during the video!

Towards the end of the video when I was ready to adhere them to my card, I couldn’t find them – they’d gone walkabouts! 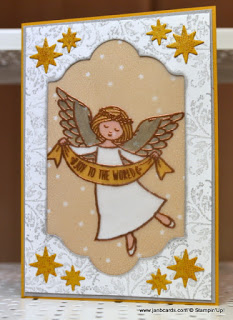 It was quite amusing watching the two stars while I was editing the video to see how and when they disappeared!

So near yet so far!

I’m going to be extra busy for the next three and a half weeks.

My top priority tomorrow will be, as soon as I’ve received my two orders from UPS, to get all my Thank You parcels ready for my wonderful customers.

Once I have them all in the post, I need to start working on my swaps for the OnStage Convention at Telford on 5th November. 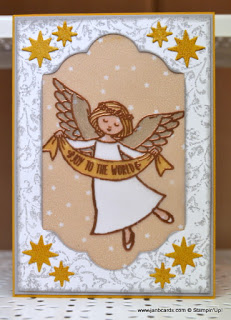 Hubby and I will be driving up on Thursday and then on Friday, we’re driving to Birmingham which is about an hour’s away to go to the Hobbycraft Show at the NEC – that’s the fabulous exhibition centre in Birmingham.

Although there are lots of independent craft shops in the UK , as well as masses of online craft shops, Hobbycraft is the biggest high street crafting retailer in the UK.

Nowadays, 99.99% of products I use for my crafting, are Stampin’ Up! products. However, there are some products I use that SU don’t sell e.g. magnetic sheets and googly eyes. I also like to keep abreast of what else is available on the market.

That’s about it for today, so I wish you all a happy Sunday and until tomorrow, happy crafting.