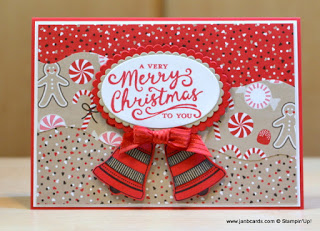 What a way to start a day! We have a burst water pipe under the floorboards, just inside the front door.

Fortunately, we have insurance cover for problems like this but it still means the inconvenience of having the water turned off!

I made sure I filled up the kettle and water filter first, though! 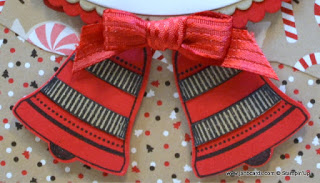 The positive side is that it makes me count my blessings and think about all the millions of people around the world who don’t have the luxury of clean running water!

Earlier this morning I uploaded my video which shows how I made the card I shared here on Friday, 21st November 2016, which had been inspired by a blouse I’d bought.

I changed the colour scheme for the video card from Cherry Cobbler and Garden Green to Real Red and Crumb Cake.

This meant I also needed to change the Designer Series Paper (DSP) from This
Christmas DSP to Candy Cane Lane DSP.

Along with Presents & Pinecones, I love the Christmas DSP that’s on offer from Stampin’ Up! this year! 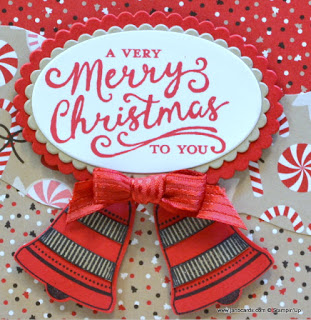 Do I have a favourite – no, not really, I think they’re all great!

I also die cut two sets of scalloped layers for the sentiment.

I’m so pleased I did that because it made deciding which colours to use so very much easier!

It also means I have enough spare parts for another project! LOL! 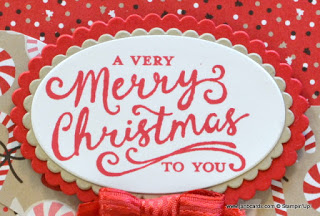 I think I prefer the Real Red card as it’s brighter than Cherry Cobbler!

One of my viewers has also told me that the ringer in the bell is called a clapper – many thanks, Carol – I really should have known that! 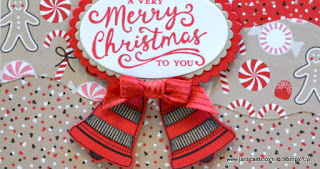 Also in the video, I was able to show how much sparkle there was on the bells from painting them with Wink of Stella Clear Glitter Pen.
It’s absolutely amazing, particularly on the Cherry Cobbler card – so intense!

I hope you enjoy today’s video.

PS Oh dear! Anthony and I finished at the same time but unfortunately he’s a plumber and our leak is caused by a problem outside the house.

We now have to wait for a water engineer to call as they need to dig outside the house!

I can’t see this being sorted today – I hope I’m wrong!

Well, there’s only one thing for it then!

Get a cup of tea and into my studio to work on my swaps for Telford on Saturday week! Happy crafting!