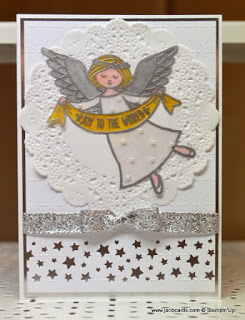 My plan for yesterday was to make tomorrow’s video showing how I made the Angel card I shared here on Tuesday.

I always make another copy of whatever the project for a video is going to be. The reason for this is so I can remind myself of the best procedure and it also gives me the opportunity to apply little tweeks! The angel card was no different but for some reason, I ended up making four angels! The first one reminded me about the correct positioning of the angel on the vellum because it needs to be just right so it fits in properly. 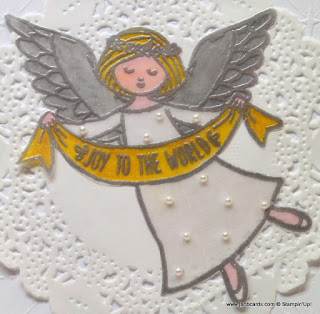 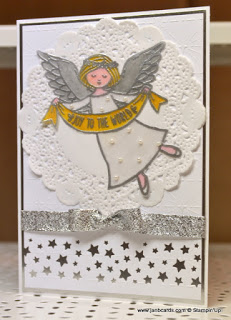 For the first one, I also decided to try heat embossing the angel in Silver rather than Copper. The plan was to layer it on some Silver Gimmer Paper, with a matching frame. It was exceedingly difficult to cut the frame in Glimmer Paper, so I decided to leave it off and to go back to the layer being in Smokey Slate Cardstock (CS). The angel needed some sort of a frame, so I sponged the inside and outside edges of the frame. I liked this a lot better than the frame as it seemed to open up the card, but I didn’t like the silver embossed angel and put it on one side for later use. I heat embossed another angel, this time in Copper. I’ll finish this part of the story tomorrow but for today, I’m going to explain what happened to the silver embossed angel! 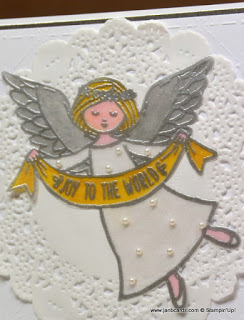 I took a card base in Whisper White CS, with a layer of Silver Foil and a top layer of Fancy Frost Specialty Designer Series Paper (DSP). I used the Star Confetti Border Punch and punched along the bottom edge of this DSP. I adhered it to the Silver Foil using Tombow Glue. I took a length of the 3/8″ Silver Glitter Ribbon, which comes as a combo pack with Sweet Sugarplum Glitter Ribbon (on page 37). I used my bow maker and tied a bow in the middle of this ribbon length. I wrapped it around the top two layers just above the punched stars and adhered each end with SNAIL.  Then I used Tombow to adhere this to the card base making sure I added some Tombow on to the ends of the ribbon. 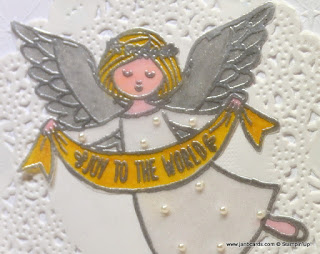 I adhered two white doilies together using a tiny amount of SNAIL in strategic positions and then adhered them to the front of the card front. Note: I’m still using my old retired doilies which are a bit bigger than our new designs. Then I fussy cut around the angel and adhered her at an angle on the doilies. My final touches were to paint the angel all over, except for her skin, using Wink of Stella Clear Glitter Pen and to add some of our smallest Pearls to her dress.

As usual, I showed hubby once I’d finished and he said the angel looked as if she’s on a cloud (the doily). It wasn’t something I’d thought of but what a lovely thought!