I hope you’ve had a great weekend. We had a very pleasant journey home yesterday after our fabulous weekend in Telford, although we drove through a couple of very heavy downpours.

We arrived back half an hour later than we should have done. When we reached the M25 (this is a motorway that circumnavigates London and the outlying suburbs) hubby chose the Dartford slip road instead of the Heathrow slip road! He was on auto-pilot because Dartford is where he works!

Fortunately, the turn-off wasn’t very far for us to leave the M25 to get onto the correct slip road, so easy……………you would think! Not at all! He chose Dartford again! LOL! We left the M25 again, found the services and filled up with diesel…..just in case!! Third time lucky, we made it!

We wouldn’t have been surprised if this had happened if I was driving, but it was so unlike hubby!

The first thing we did when we arrived home was to have a cup of tea! Then it was all hands to the pump to get the unpacking done and the washing on the go. We make a good team and it didn’t take too long. 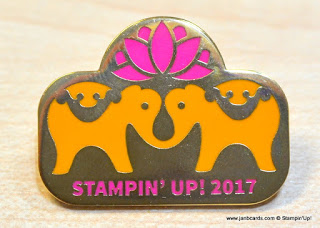 I moved into my studio to sort out all the bags I’d dropped off in there so I could take today’s photographs.

I also have three of hubby’s birthday cards I want to share with you but they will be tomorrow! ☺ 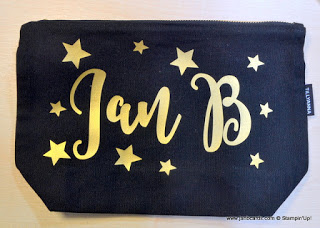 Photograph 1:  my ribbons! I love that Stampin’ Up! printed my name as JanB on my name tag as requested. THANK YOU, SU, love it!

SILVER is my level
FLEX POINTS 160,000 shows I earned the Thailand 2017 Incentive Trip
Annual SALES shows I achieved 10,000 CSV (that’s SU “currency”) and the line around the words show that I achieved that amount in one-quarter i.e. three months
Annual LEADERSHIP I think this was the number of promotions I had in my team 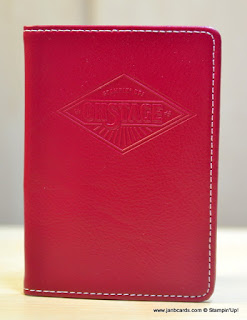 Annual RECRUITMENT with a line round it shows I had more than a certain amount of qualified recruits during the year. Again, I’m not 100% certain but you get the idea!

(If there’s any demo reading this who knows the answers, can you let me know, please? Thanks ☺)

Photograph 2: I was also given this pin in recognition of having earned the 2017 Incentive Trip.

Photograph 3: this is a gorgeous personalised bag I received from my team leader Kim Fee. This is oh, so, me! Many thanks, Kim, I love it! 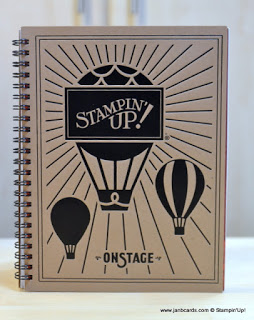 Photograph 4: this was in the goody bag I received at check-in. No prizes for guessing it’s a passport holder! Thank you, SU!

Photograph 5: this notebook was also in my goody bag. It has special pages inside for recording dates, goals, challenge results, etc.

Photograph 6: these three pens were also in my goody bag! I’m getting a nice collection of different SU pens. I’ll have to start giving them away soon!

I’ve forgotten to photograph my goody bag and also the notebook I received from Kim. I’ll try and post them tomorrow with the three birthday cards.