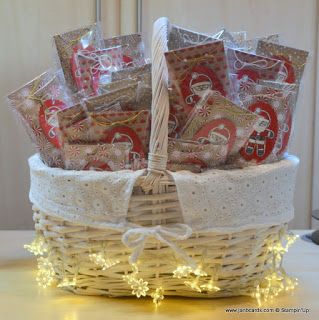 This morning I posted my video which shows how I made my swaps for OnStage yesterday.

When we check-in at OnStage, we’re given name badges and lanyards, as well as a strip of Silver ribbon which shows what title we have achieved, plus strips for any achievements during the past twelve months.

This year I received an extra four ribbons from the silver one: Flex Points for achieving 160,000+ points; Annual Sales for achieving 10000 CSV in sales in one year, and one-quarter; Annual Recruiting and Annual Leadership.

I’m not sure exactly what I did to earn these – suffice it to say, I earned them!

Hubby took a photograph of me wearing my lanyard, name badge and ribbons but he failed to notice it was back to front! DOH!!

We’ll re-do it when we get home later today so I can share it with you tomorrow! 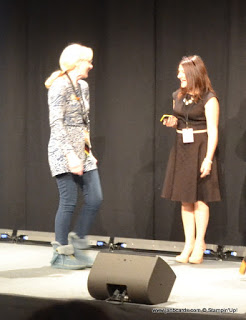 We had a fabulous time at OnStage yesterday. There was one tiny
fly in the ointment in as much as it took so long to check in, I lost a
lot of valuable swapping time!

The result is that I have come back with
several of my own swaps. On the positive side, I’ll remove the list of
ingredients I had to put inside and they’ll be ready for the Gingham
Goose Craft Show we’re doing next Saturday.

But no worries, I still have
lots of brilliant swaps to share with you and will get them videoed
ASAP. ☺

We
have been given copies of the new Spring Catalogue and the
Sale-A-Bration catalogues which we’re not allowed to share for the next
couple of days.

One of the many highlights of Onstage is Prize Patrol,
of which there about 6 or 7 throughout the day. I was so lucky to win
the first one which is an absolutely fabulous stamp set – same thing
happened last April when I won the Baby Bear Stamp Set!

During
the day there were several achievement recognitions. For the first time
ever, I walked the stage………not just once, but THREE times! I was
sort of expecting one but the other two were total surprises. I was on
cloud nine.

OnStage
started at 8.30 am and finished at 7 pm – a long day. Fortunately, we
had already booked a table for Audrey, hubby and I for dinner at 8 pm,
which meant we didn’t have too much of a late night last night!

We’re
now almost packed and ready to head home. Audrey’s train back up to
Scotland is at lunchtime, so we’ll all be leaving at more or less the
same time.

That’s about it for today. Here’s hoping to a lovely three hour journey home! Until tomorrow, happy crafting,