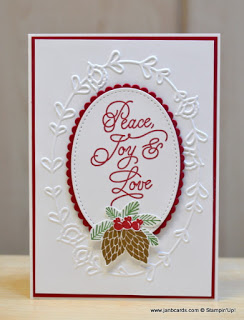 Today’s
card is the second of
my three cards made using the Peace This Christmas Stamp Set.

I adhered the Cherry Cobbler layer to the card base using
Tombow.

I found the top Whisper
White layer in my DVD box called Layers 2.

It had already been dry embossed
using the Pretty Paisleys Embossing Folder. 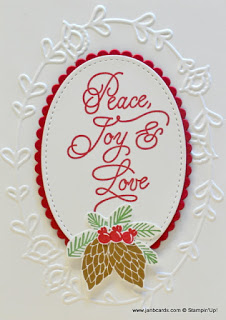 This layer had obviously been prepared for a previous card, but I’d decided, for whatever reason not
to use it.

I adhered it to the Cherry Cobbler CS layer already adhered to the
card base.

I laid the scalloped framelit
die inside the embossed circle to check the size and found it fitted nicely
side to side and the top but it left quite a gap at the bottom.

This was my inspiration!

Using Cherry Cobbler CS,
and the scalloped oval framelit die I’d
used for measuring – it’s from the Layering Ovals Framelits Dies – I die cut a
layer for the sentiment. 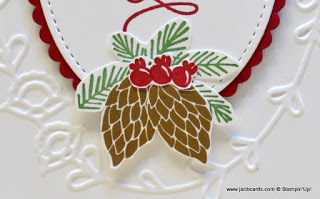 Then I die cut a Whisper White CS oval Stitched
Framelit Die that fitted inside the Cherry Cobbler scalloped oval.

I still had
my Stamp-a-ma-jig set up from card number 1 (see yesterday’s blog) so I was
able to stamp the sentiment using Cherry Cobbler Ink but towards the top of the
Whisper White CS oval. 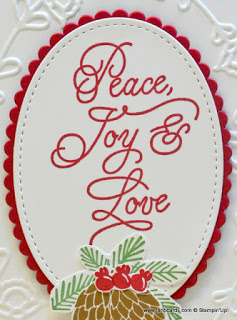 I adhered the two ovals together using generic ativan online Tombow and then
adhered them onto the card front with Dimensionals.

I still had several stamped
fussy cut images from the pile of I did at the beginning of this cardmaking
session.

I took one pine branch and adhered it to the base of the oval; then I added two pine cones and one set
of berries.

As I was arranging them, I made sure they concealed the gap at the
base of the embossed oval to ensure the overall image looks central.

I had a telephone call from
a lovely young lady called Joanne from British Gas this morning. 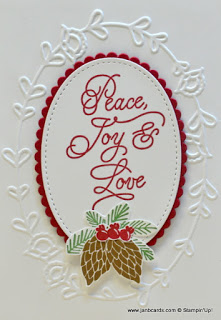 She was
suitably horrified at the inconvenience we had been put through recently when
our water mains was turned off for six days.

She said our human rights had been breached by being made to go without water
for six days!

I’m pleased to say BG have launched an internal inquiry to find
out what went wrong, so they can take steps to make sure this doesn’t happen
again to anybody else!

That’s as much as we hoped for when we wrote our letter
of complaint after the problem of the burst water main had been resolved.

Then Joanne
told me BG was also offering us a small amount of compensation for the problems
we had endured! 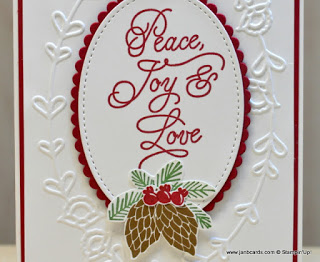 It’s not enough to change our lifestyle,
but it’s the thought that counts, and very much appreciated.

That’s about it for today.
Until tomorrow, happy crafting.