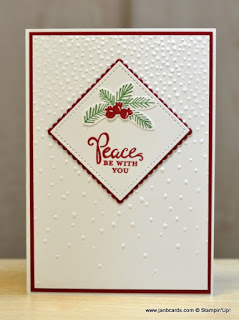 I’m so surprised to be
sharing Peace This Christmas card number 4 with you.

It definitely wasn’t
part of a plan – it really just happened!

Yesterday, after I’d finished tidying
up after recording Sunday’s video, it was time for me to plan today’s card.

I saw the little pot on my
desk that still had several pieces that I’d fussy cut out last Sunday when I made
the first three cards in this series. 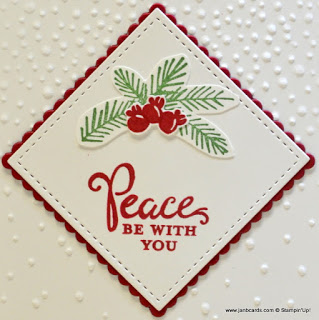 I tipped them onto my grid paper to see
exactly what I had and the rudiments of another design came to mind!

I started my card with a
base of Whisper White Cardstock (CS) with a layer of Cherry Cobbler CS.

I
adhered the two pieces together with Tombow.

It was a bit of a struggle as my bottle
was nearly empty – I’d already had two bottles I had to throw away during the
day and it looked as if there was going to be a third! 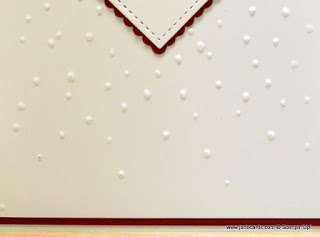 I looked in my DVD box
called Layers 2 to get a Whisper White top layer and saw a layer that had already
been dry-embossed with the Softly Falling Embossing Folder.

As I was planning a
plain looking image, I decided a patterned layer would be a good idea, so adhered it on top of the Cherry Cobbler layer!

My plan was to have a
sentiment and some of my fussy cut pieces on a Whisper White Square, turned at
an angle. 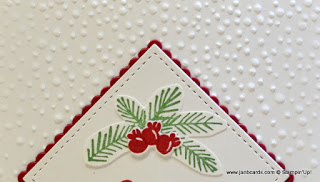 
Using my Grid Pad as a
guide, I laid the stitched die cut as a diamond.

I chose the sentiment from the
Reason for the Season Stamp Set and inked it in Cherry Cobbler Ink. 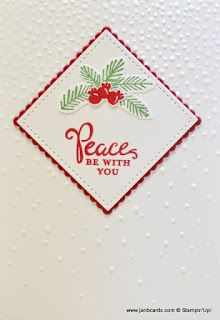 As it’s a
photopolymer stamp set, it was easy to position the sentiment straight in the
bottom point of the diamond.

I played with a few arrangements of the die cuts
and settled on the clean and simple layout you see here!

I adhered the two die
cuts in place with Tombow and then adhered the Whisper White square onto the
Cherry Cobbler Square.

I used Tombow to adhere the image directly onto the top
layer of the cardbase.

I still have more die cuts leftover – will there be number 5 tomorrow? 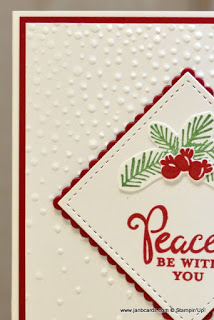 I certainly don’t have any plans for one at the moment!

Next year is promising to be an exciting year for me already!

Yesterday afternoon, one of the ladies in my team asked if I’d do a Craft Retreat with her next year.

Do I breathe?  Of course, I’d love to do one,  so we’ve started our planning!

We were on the telphone for almost an hour yesterday afternoon covering the basics of what we both expect from a retreat, projects, hotels, and a million other topics that cropped up.

It’s going to be quite a challenge as we live a long way away from each other – about a four hour drive! 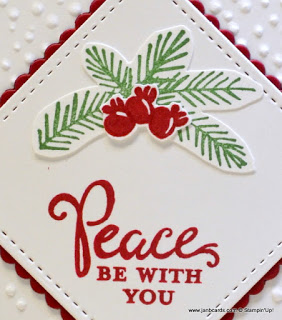 The two main decisions have been pencilled in for the event i.e. it will be held in September 2017 and somewhere in the Derbyshire/Cheshire area.

This is going to be so exciting – do watch out for developements as they happen!

That’s about it for today!